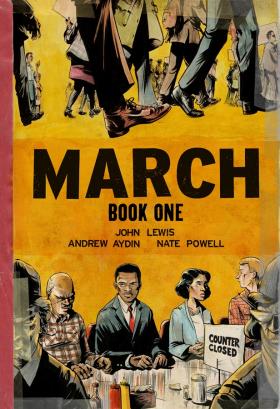 Before he was co-author of a New York Times bestselling graphic memoir about the life of Congressman John Lewis, Andrew Aydin was Lewis’s communications staffer. “You know, you work in politics, and in some ways, you work around many, many storytellers,” he says. “And John Lewis is the best storyteller.”

The inspiration for the memoir March: Book One, which came out in July, derived from a 1956 comic book about events in the life of another civil rights activist and storyteller, called Martin Luther King and the Montgomery Story. (You can see that full book here.)

That work inspired Lewis to get involved in the movement as a young man, and after reading it himself in 2008, Andrew Aydin suggested to Lewis that he write his own comic book.

Kate Sweeney sat down with Andrew Aydin and comic book artist Nate Powell, to talk about their experiences creating March. 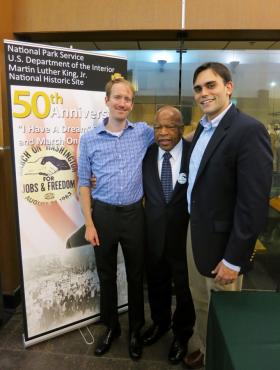 Andrew Aydin, Nate Powell and John Lewis will be signing copies of March after Lewis’s keynote address at the Decatur Book Festival on Friday, August 30th.