Editor’s note: Read part one and part three of this series.

Cityhood is a term you may have heard recently but didn’t really know what it meant.

It’s a quick way to explain the process of unincorporated parts of counties creating proposals to become their own cities. In the past decade there have been nine of these in metro Atlanta.

One place where the idea of city creation is at the forefront is DeKalb County. There are currently four different cityhood movements in the works.

Two will get a vote later this year, and two others are still stuck in the legislature, but the cityhood trend isn’t entirely new in DeKalb.

Many of the county’s residents talk about their need for tailored services and economic development as reasons for wanting cityhood.

One thing they’re not talking about, at least not directly, is the racial divide in DeKalb County. 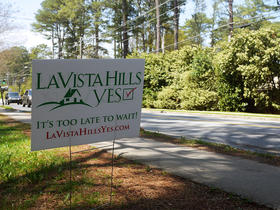 Greenhaven and Stonecrest supporters in the south end of the county are majority African-American while LaVista Hills and Tucker, in the north, are mostly white.

The proposed city of LaVista Hills is 64 percent white while only 16 percent is black, according to data from the Legislative & Congressional Reapportionment Office, which uses the latest census data and the approved boundaries for the proposed cities.

16 percent of LaVista Hills residents in the proposed boundary are Hispanic and 9 percent are Asian.

In the proposed cities of Greenhaven and Stonecrest over 87 percent of these areas are black. White, Hispanic and Asian residents make up less than 7 percent of the population there.

But is the racial makeup of these proposed cities just a matter of coincidence?

“The county is majority black, the county government is majority black ─ run by blacks some would say. How could one be so naive as to think that creating a city separate from the county wouldn’t be perceived racially,” asks Owens. “It’s sort of just really curious, right?”

Owens lives in the proposed city of Lavista Hills and is not in favor of it.

The area will vote on cityhood later this year along with Tucker because the proposals got through the Republican-controlled legislature. Greenhaven and Stonecrest did not.

Despite the contrast in demographics between the areas, Owens says race isn’t the only reason the bills probably didn’t make it through. For one of the cities, Greenhaven, it’s also timing.

“Greenhaven just sort of came out of nowhere. Like, really, it just sort of fell out of the sky,” says Owens.

There’s also its size. If Greenhaven were to become its own city it would have nearly 300,000 residents, making it the second largest city in the state behind Atlanta.

No other proposed cities have been that large.

“One of the reasons I think there is concern, or would be concern in the legislature, is I think that there’s great support for the idea of cityhood, and for local government, and governance, but it’s not supposed to be big,” says Owens.

He says these most recent cityhood movements are just the beginning.

“In metropolitan Atlanta I do think we’ll see more, particularly if there is evidence that cityhood is a good thing,” says Owens.

He cautions about the way success for new cities may be measured through economic growth, decreases in crime and public space improvements.

Particularly because many of the places that have become cities didn’t necessarily have a dearth in resources for these kinds of improvements when they were formed, says Owens.

If this latest wave of cityhood continues, Georgia could see even more city proposals when residents are unhappy with their county government.

The roots of cityhood in DeKalb can be traced as far back as 15 years ago when Vernon Jones became the county’s first black CEO, says William Boone, who teaches political science at Clark Atlanta University.

“Vernon Jones was a polarizing individual, and sometimes that polarization manifested itself in terms of geography and race,” says Boone.

Boone says the CEO role in DeKalb has a lot of power, and the way Jones used his power rubbed some people the wrong way.

“Up until Vernon Jones you had all white CEOS and white domination of the county. And here comes Vernon Jones ─ who is very, very open about the fact that there are those in the county who have not been receiving resources and services from the county, and therefore it’s time for a change, ” says Boone. “That sets up the argument ─ you black versus white ─ because we know who lives in the north end, we know who lives in the south end. So north, south just become metaphors for what? Black. White.”

There’s also a problem with corruption that has long plagued DeKalb.

In 2000 there was the contract killing of sheriff-elect Derwin Brown by his opponent Sidney Dorsey.

Two years ago, Gov. Nathan Deal removed six members of the county school board over concerns of questionable hiring practices and mismanagement of money. And then there is suspended CEO Burrell Ellis who’s being re-tried this summer for extortion, theft by taking and conspiracy charges.

The county’s interim CEO Lee May says he knows DeKalb has its problems.

“It’s a challenging period right now for DeKalb, but we are being very proactive with dealing with those challenges,” says May. “Those instances of corruption and with waste fraud and abuse are [concerning] and so, yes, it’s a problem and it’s a concern for me as well but, again, the grass is not really greener on the other side.”

Earlier this year, May hired former Georgia Attorney General Mike Bowers to launch an independent investigation of corruption in DeKalb.

Bowers will be looking at over 6,000 county employees that include May and his senior staff.

Just a month after announcing the countywide investigation, May himself faces allegations that he received preferential treatment from a county contractor.

But May denies the allegations and says everyone in the county has to face its problems.

“You can’t run ─ even if you form your own city you’ll still be in DeKalb County,” says May. “We want people that are committed to making DeKalb County strong, and I think that will make us a better place.”

*This story has been updated to reflect the time period when the cityhood movement for the proposed city of Stonecrest began and to include additional census data.