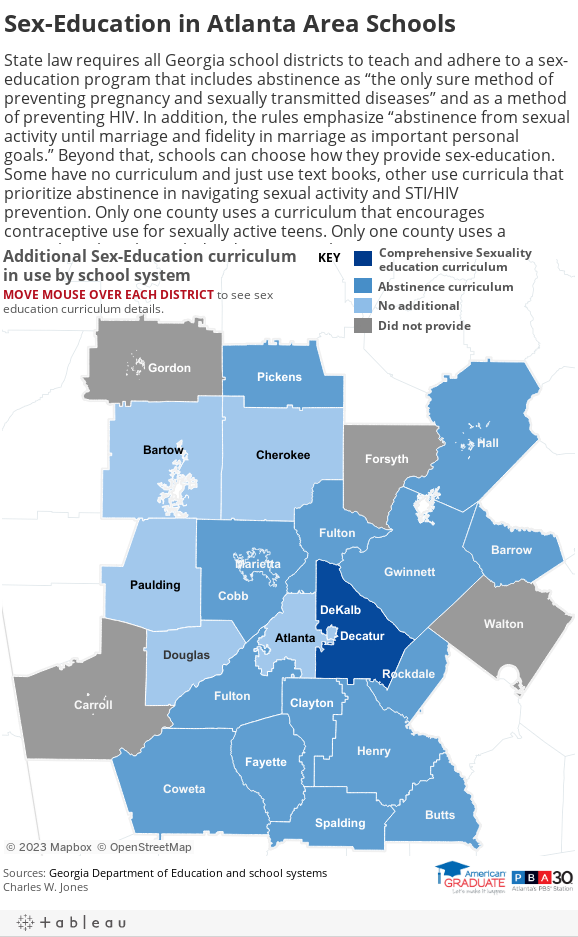 One wall of the classroom is decorated with bright, colored diagrams of reproductive systems. The fact that Bailey’s class at Cross Keys High School is about more than just those diagrams is a little out of the ordinary.

“So, remember again,” Bailey said to the class. “I’m always preaching and pushing what? What’s the 100 percent way to keep yourself free of STIs, STDs and pregnancy? Abstinence!”

“However,” she added, “if you choose not to be abstinent, you much choose to protect yourself. You must choose to use protection. You must look out for you.”

Encouraging contraceptive use for students who are sexually active is not required by law in Georgia.

“They have to include information on peer pressure, promotion of esteem, community, abstinence as an effective method,” said Therese McGuire, with the state Department of Education’s health and physical education division. “They have to discuss HIV/AIDS.”

The law also says schools must emphasize abstinence until marriage and marriage fidelity as important goals. How each school chooses to teach those topics is up to the districts.

“It really is up to their local system and their local board makes those decisions,” McGuire said.

Bobby Brewington is a former physical education teacher who now works with the Georgia Campaign for Adolescent Power and Potential (GCAPP), which works to combat teen pregnancy.

When Georgia schools do use a specific curriculum, abstinence until marriage is a popular message.

“Choosing the Best,” is an Atlanta-based publisher of curricula that calls itself “abstinence-centered.” It is big in Georgia, and big nationally. In a sample video from their class material, young people share their concerns about intimacy and the risks of sex before marriage.

“If I am committed to somebody, then I’ll marry that person,” says one young man featured in the video. “And until that point, I’m not ready for all the consequences and emotional trauma that comes along with being in a relationship or being sexually active in that relationship.”

The program discusses, but does not advocate for students to use contraception.

The CDC says roughly half of American high schoolers have had sexual intercourse, and recommends that effective high school sex education programs work both to increase condom use and delay kids from having sex.

That’s what they’re doing in DeKalb, which offers comprehensive sexuality education. They started using the curriculum in 2014. DeKalb dropped Choosing the Best about a decade ago.

For teachers like Bailey, the new lesson plans have been a welcome change.

“I was absolutely elated,” she said, “because I knew that our population needed it. Not just us, but most of the kids in high school. There are still some counties that don’t do sex education.”

“I know two of my closest friends have had a child when they were 14 or 15,” said one student. “It’s been rough because she has three children right now and she has it rough right now.”

Others in the class have watched kids their age get pregnant too. That’s why Bailey is big on getting her kids to think about the future.

“So if you know that you have a career path, you know you want to finish college before you have kids, then you better be the person most concerned about that birth control. Does that makes sense?” Bailey asked her class.

Nationwide, teen birth rates have been dropping for decades. Some researchers believe that’s because kids are waiting longer to have sex, and using are contraception when they do. Numbers in Georgia have dropped as well, but the state’s rates remain slightly above the national average.

This story is part of American Graduate, Let’s Make It Happen, a public media initiative made possible by the Corporation for Public Broadcasting.