This teenager will soon compete in a TV quiz show where he’ll have to give answers in the form of questions.

A:  Who is Douglas County High School senior Josiah Takang?

It doesn’t take long to figure out that Josiah Takang is really smart. Take, for example, what he’s doing this summer. 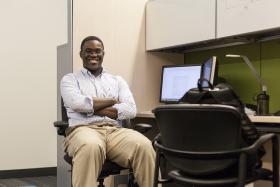 “My particular project, and really the entire lab’s function, is using a functional MRI, or FMRI, to find what part of the brain ‘lights up’ when specific tasks happen,” he says during an interview at Emory’s biomedical department, where he is working this summer. “And really, from that, you can outline where the motor networks are in the brain.”

Josiah recently turned sixteen years old. Next week, he’ll represent Georgia in the Jeopardy! Teen Tournament. He credits his parents, who emigrated from Cameroon in West Africa, for sparking his interest in learning.

“They bought us a lot of encyclopedia-type books for us to read, and that’s where I gained a lot of my factual knowledge from and really it translated into me being on the Quiz Bowl team my freshman year,” he says. 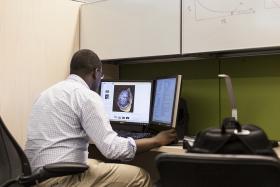 The show has already taped in Los Angeles. Josiah is contractually bound and can’t give anything away. He says it was a good experience.

“All the kids were really competitive and really, for me, it was surprisingly friendly,” Josiah says. “We developed a rapport really quickly. And we still communicate with each other, basically on a daily basis through phone and Facebook, et cetera.”

Josiah eventually wants to become a doctor, specializing in neuro-oncology. But being a Jeopardy! Teen champion wouldn’t be bad either.