But the storm’s departure was just in time for one major occasion.

Morehouse is the nation’s only all-male historical black college or institution and is one of three all male liberal arts colleges in the country.

Dr. John Silvanus Wilson Jr. is what you call a Morehouse man. 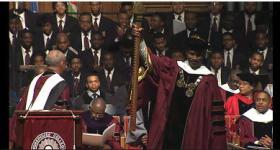 And has a doctorate in education.

In his inauguration address, Dr. Wilson stressed the core initiative of the school.

Wilson talked about the biggest challenges many colleges and universities face and that’s building and sustaining capital.

Wilson’s ability to bring in money is apparent in his background.

According to his bio, while at MIT he was instrumental in managing two record-breaking capital campaigns that reached nearly $3 billion dollars.