The U.S. Geological Survey reports the quake measured a 4.1 on the Richter Scale. 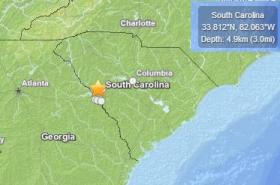 It was centered seven miles west of Edgefield, S.C.  But the quake shook homes as far west as Atlanta, and as far north as Hickory, North Carolina. Each is about 150 miles from the epicenter.

No significant damage or injuries have been reported.

Quakes hit this region once every year or two.

While small compared to those in the western US, the 4.1 magnitude is notable for the South.

The biggest earthquake on record in this area of Friday’s tremor is a 5.1, and it happened almost a century ago.