When the housing bubble burst, metro Atlanta school districts felt the effects. Declining home values resulted in fewer property taxes, which comprise the majority of most school districts’ budgets.  The sudden financial strain caused some metro-area school systems to plunge into debt. But the Fulton County school system has managed to operate at a surplus.

“As we began to see the economic decline headed our way, we made the tough decisions to make cuts,” Avossa says, “We cut teachers. We cut nearly $100 million out of our budget.”

Because salaries make up the majority of a district’s budget, Avossa says those cuts were unavoidable. But, he says, the system has adopted what he calls “Modified Zero-Based Budgeting.”

“Rather than an incremental budget, where each year you take last year’s budget and just add a percent or two, each department  has to come to cabinet before the superintendent and make a recommendation and we say ‘yes’ or ‘no’ whether or not they’re aligned to our key district initiatives,” he says.

Avossa says that has allowed the district to restore some cuts. In 2010, there were six furlough days; now there are none. And, he says, over the next three years, the district plans to add back three days it cut from the calendar.

“Why do one-time compensation?” Morales asks, “Because it’s non-recurring. It doesn’t have to be done again unless we have the availability.”

Morales says conservative measures like that have also helped the district save. And he also credits the school board.

“We have a very long-lasting school board who have been here, and who have seen and understand, and ask questions,” he says, “I present financials monthly to the school board. They always ask very tough questions.”

The board also has the authority to raise the property tax rate.  But it hasn’t since the financial crisis started. The county’s millage rate could go as high as 25 mills. It’s currently at 18.5, one of the lowest in metro Atlanta.

And Morales and Avossa both say it won’t increase this year.

While other districts have also had to make cuts, many of them are in debt. Cobb County is looking at a projected $86 million deficit. DeKalb’s is estimated at $24 million. The Gwinnett County schools carried an $89 million  deficit this year. 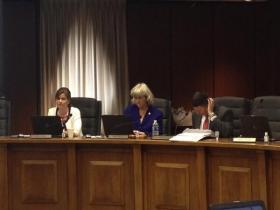