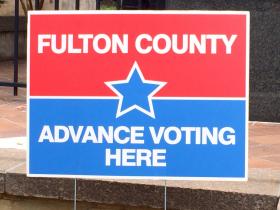 As early voting for Georgia’s upcoming primary election gets underway, Fulton County election officials say they’re “confident” they’ve worked out past voter issues, but also hope to drive the majority of voters to polls ahead of Election Day in part to address any potential problems.

Seven early polling spots in Fulton opened Monday morning, the first day of early voting.  As heard on the radio.

Fulton Elections Director Richard Barron said that number will expand to 19 next week in order to give more residents the opportunity to vote ahead of the May 20 primary. He said it’s the largest early voting expansion the county has undertaken.

“You get a crush of people on Election Day,” Barron said. “You tend to have more provisional voting on Election Day, so we’re trying to reduce that. You can solve issues much easier during early voting. You have more time, since you have three weeks.”

During last year’s municipal election, glitches in the state’s new election software forced the county to send out 20,000 new voter registration cards after errors were printed on the first batch. Similar problems were reported in a handful of other counties, too.

Barron, who was hired in May 2013, said he’s confident his office has worked out the problems.

“You can’t change everything overnight, but we’ve been working with the secretary of state and with all of our intragovernmental partners to make sure we change the way we do business,” Barron said.

Barron says he expects turnout in the county to be about 20 percent. He said about 500 people had voted as of Monday.

The primary election is May 20.