This is day one of the new legislative session in Georgia.  Representatives from across the state have convened under the Gold Dome to take on the issues that voters are concerned about. 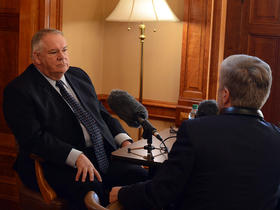 In the first part of an interview with WABE’s Denis O’Hayer, House Speaker David Ralston acknowledges that transportation may top the list. During the long conversation, he told O’Hayer about the upcoming transportation proposals facing the Georgia General Assembly.

Ralston also defended law enforcement officers, stating that he would not allow them to become “Enemy Number One” while discussing body cameras and other surveillance tools.

In the second part of the interview that will air tomorrow, Ralston shares his views on controversial bills on religion and the fight over which schools should receive state money.