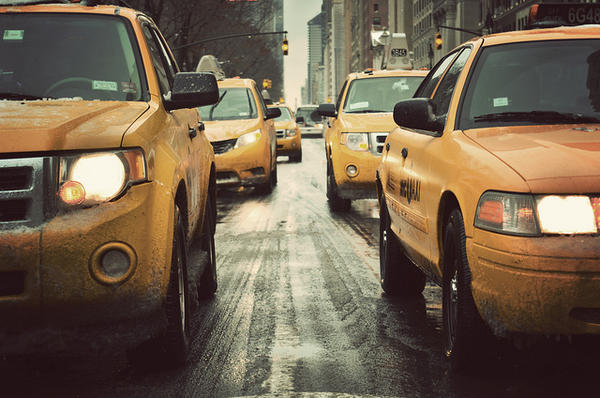 As of Wednesday, Georgia will start to regulate ride-sharing companies like Uber and Lyft. The new law also gives the state the power to oversee taxi cabs. That’s a big change because inspections and permitting used to be handled by local governments like the city of Atlanta.

On a recent Sunday afternoon, taxis are lined up near the Hyatt Regency in downtown Atlanta. Otis Sales is in the third cab back. He’s been driving a taxi part time for over 40 years. But in the past year or so, he’s noticed a drop in business.

Sales knows there are new state rules on the way, but he doesn’t know much about them. He says he’d like to see Uber drivers have the same standards as taxis and be regulated.

To get a permit to drive a cab, Sales has to pay insurance, undergo a background check and get his taxi inspected twice a year.

The city of Atlanta didn’t require ride-sharing companies to get the same permits. For Sales that means Uber drivers have fewer regulations and can charge less. He thinks that gives them an unfair advantage.

“What’s going on now, anybody can get a car, and to me it’s a little dangerous,” says Sales.

Christian O’Brien is one of those Uber drivers. He was at the same hearing. Much like cabbies, he’s just trying to make a living.

“I’m fortunate that this exists, that Uber exists, because it’s helped my family. It’s helped my income,” says O’Brien.

O’Brien says he also wants things to be fair. And that’s what the new state law is supposed to do. Under the new law, cities like Atlanta can set a maximum fare, but it doesn’t prohibit cab companies from charging lower prices.

Mike Mitchell is the legislative liaison for Georgia’s Department of Driver Services. He says now all ride-sharing and taxi drivers will be required to get a background check. Drivers can get those checks through the state, or companies can contract with a third-party vendor.

“I think the whole impetus is public safety, and it’s ensuring that when a fare gets into the car with someone that, that person who is driving does not have something in their criminal background that places that customer at risk,” Mitchell says.

But while the actual drivers will be scrutinized, the cars themselves won’t.

“I think that still is an industry that needs monitoring and it needs attention, I wouldn’t say day-to-day, but certainly periodically to ensure passengers are safe,” says Martin.

He’s concerned the state won’t be able to oversee taxis or ride-share companies as closely as the city could.

Back near the Hyatt Regency, taxi driver Janice Veal says the state’s decision not to do taxi inspections should be OK. Veal works for Atlanta Checker Cab and says her company already takes a close look at her taxi.

The tires, paint and everything else on Veal’s car is checked, she says.

Veal says she prays the new law will improve things for taxi drivers.

Veal used to work five or six days a week. But since Uber and other ride-share companies came to Atlanta, she now drives her cab every day to try and pay for her daughter’s college tuition.

“The biggest hope is that us cab drivers won’t be out here on Sunday, and that I won’t be talking to you. I can be home Sunday and back in church and back with my family.”