A Marietta choir director has filed a federal complaint saying he was forced to resign from his job because church members complained about the fact that he is gay.

Ira Pittman had worked at Mt. Bethel United Methodist Church for more than 20 years. His complaint — which was filed with the Equal Employment Opportunity Commission and shown to WABE — comes as the United Methodist Church is in the midst of a debate about possibly changing its rules on LGBT exclusions. The church’s international gathering, the General Conference, in which changes to doctrine are decided every four years, is this month.

Pittman said, other than telling a handful of trusted co-workers, he had kept his sexuality — and his partner, Bill, of 16 years — hidden and separate from his life at Mt. Bethel.

Then, in December, he threw a small Christmas party.

“This whole thing evidently revolved around the fact that I had a gathering of my music staff, 10 people and their spouses, at my home with my partner, just to have an enjoyable meal and fellowship together,” Pittman said.

A day later, Pittman said the church’s senior minister invited Pittman and his partner to his dinner party. “I just felt like the heavens had opened up, and he’d had a new realization,” Pittman said. “We had a great time, and nothing but positive was said until he called me up and said, ‘We have a problem.’”

After the parties, someone had complained that Pittman had purposely thrown a “coming out party.”

“And by doing so, I was in defiance of Methodist doctrine,” Pittman said.

Pittman said the description of his gathering as a “coming out party” is inaccurate. Pittman said he also does not understand how his sexuality became a problem for the church’s management. He said during the meeting where he got fired, the senior minister told Pittman he knew he was gay when he hired him.

“If it were up to [him],” it wouldn’t be an issue, Pittman said the senior minister told him. Pittman said the minister even said congregation members were “circling as wolves” that “could no longer tolerate this.”

Mt. Bethel did not respond to multiple requests for interviews for this story.

Even now, “defiance” is not a word Pittman identifies with.

“I did not want to be a flag-waving, rebellious person to these people who had loved and supported me for 21 years,” he said.

He said he was given the option to resign or be fired on the spot. Pittman said he agreed to “retire” quietly. He said he did not want to cause a scene even though he did not think he had done anything wrong.

“It was an instantaneous time of feeling like Saul in prison, praying, ‘God, what are you trying to do here? Why are you persecuting me? I haven’t done anything wrong. I have served you. I have been faithful to this church. I have done everything in my power to use the gifts that you’ve given me and now all of it just seems to be going down in a tailspin,’” Pittman said, referring to the biblical Saul, who later became the apostle, Paul, and was often imprisoned for preaching the Gospel.

In Georgia, what Pittman said happened to him is not illegal.

Federal protections are where terminations such as Pittman’s might run up against the law. Title VII of the Civil Rights Act of 1964 prohibits employer discrimination based on sex, but Shanor said it is tricky.

“The basic background is that Congress, when it passed Title VII in 1964, did not have in mind protection of individuals because of sexual orientation,” Shanor said.

And for a long time, Shanor said, Title VII has been interpreted not to apply to the lesbian, gay, bisexual and transgender community. But he said that is starting to change, especially since the U.S. Supreme Court ruling allowing same-sex marriage. The EEOC has begun picking up these cases alleging discrimination based on sexual orientation in the past year or so, Shanor said. “EEOC has won a couple and lost more.”

Shanor said, right now, there is no explicit federal employment non-discrimination law that protects people like Pittman. Measures have been proposed in Congress since the 1990s but have not passed. In the meantime, Shanor said, “EEOC is trying to fill the gap,” by taking these cases to court.

With a complaint like Pittman’s, if a judge does not dismiss it as legally inadequate, the church could decide to settle or the case could eventually be decided by a jury.

Situations like this just have not been worked out in our legal system yet. Unless Congress makes LGBT employment protections law, it is going to take a big Supreme Court case decision to reach some clarity on the issue, Shanor said.

Pittman is waiting to hear if Mt. Bethel is willing to negotiate a settlement over his EEOC complaint.

The decision to fight his termination was not a given for Pittman.

He said, at first, he agreed to bow out gracefully. He went back to his choir and announced he was going to retire. But, he said, they just didn’t buy it. “Immediately people came up to me after the rehearsal and said ‘This is not you. You’re being forced out. This is over your sexuality, isn’t it?’ I said, ‘I can’t comment,’” Pittman said.

He said he had never had a bad employment review and that the congregation was supportive and appreciative of his work. Within days of his firing, Pittman said he heard from other people who had been forced out of religious institutions and other jobs.

“Good people who are doing good jobs are being uprooted from that for ridiculous reasons,” said Pittman, “and if I can have something to do with stopping that steamroller, then I will do that.”

As for the United Methodist Church’s debate on LGBT inclusion, “We’ll probably begin discussions on that early next week,” said Matt Berryman, the head of Reconciling Ministries Network, an advocacy group.

Berryman is in Portland, Oregon, right now for the UMC’s General Conference. Delegates meet every four years to debate and decide UMC doctrine. Current rules say “LGBTQ clergy who are in committed relationships are prohibited from serving as clergy,” Berryman said. “They are also not allowed to be self-avowed and practicing.”

Officiating same-sex marriages is also not allowed. Clergy can have their ordinations revoked.

“It’s not like we don’t have closeted gay people serving in the United Methodist Church or closeted trans people for that matter,” Berryman said.

He said LGBT exclusions are already a major point of contention at this conference. This week, more than a hundred LGBT ministers have publicly come out of the closet in defiance of the Methodist bans. 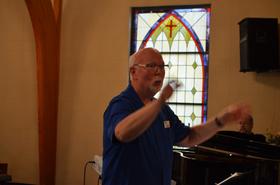 Pittman is not a member of the clergy. He is a choir director.

But like those ministers, he has known he is gay for decades. “Yet I fought it for years,” said Pittman, “I went into a marriage trying to cloak the fact that I was fighting this internally. And not until my 40s did I finally come to grips with this. And for the last 23 years have finally been able to live my life, not necessarily comfortably, but in a positive matter, accepting who I am and hoping that others would accept me for who I am.”

He said he first started playing the organ for a church when he was 15. Teaching and performing music has been his whole life.

“To come upon year 62 of my life and be told ‘You can’t do this anymore’ was devastating, and then within a week after that be told, ‘Yeah, you can, right here,’” was an incredible relief, said Pittman, who got a new job almost immediately.

When Nanci Hicks, the senior pastor at East Cobb United Methodist Church in Marietta, heard Pittman was looking for work, she “snapped him up.” UMC rules state employment decisions, except when it comes to clergy, are up to each individual church.

Hicks’ first thought: “Wow. It would be great to have a person with great credentials and knowledge of people in our choir to help lead worship at our church,” Hicks said. At her church, Hicks said, Pittman being gay is not an issue.

“I consider a huge part of my life’s work to remove barriers for people from God and from love,” said Hicks. “And anytime there is a barrier, it kind of breaks my heart.”

She said she is hopeful Methodists will make a big change on these issues soon, but there are concerns it could actually cause a split in the church. Hicks said she knows not every Methodist thinks like her, but she doesn’t agree that LGBT inclusion is going to violate her religious practice.

At rehearsal with his new choir, Pittman’s hands flow with the melody and then snap militantly to keep time. He is loving but direct with his singers when they miss the mark. He cracks jokes and smiles wildly, totally unrestrained.

“Nothing but loving and accepting and welcoming” is how Pittman described his new church. His partner attends East Cobb UMC regularly. “He was always in the shadows at the previous church,” Pittman said. “We just had the entire staff over to our house for lunch. Had a wonderful time, everybody was just — like it’s supposed to be.”

Pittman and his partner, Bill, got married in April, a few months after he left his old church. A retired Methodist minister officiated; it was an Episcopal ceremony.

The United Methodist Church is expected to make a decision on LGBT exclusions by the end of next week. Many options will be on the table, and the 864 delegates could decide to change nothing.