State environmental officials say the U.S. Army has not fulfilled a commitment it made to help residents of 26 homes that have tested positive for toxic vapor near Fort Gillem. Officials say the Army agreed to install vapor mitigation systems within the 26 homes no later than Sept. 11 but has yet to act.

Susan Martin-Morgan lives about a mile from Fort Gillem. She said the Army sampled the air quality of her home and discovered it contains elevated levels of dangerous chemicals that could pose a long-term risk to her family’s health. 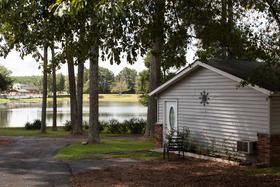 State environmental officials believe the toxic vapor is entering homes from contaminated groundwater originating from the former army base. Martin-Morgan said she and other family members have suffered from health-related issues that could be related to the hazardous chemicals.

“I’m just ready to move because I have a grandbaby here too, and he’s been sick. I’ve been feeling sick, hardly breathing at night when I’m ready to go to bed, and then my husband just detected a knot growing on his chest, and he said it was kind of bothering him.”

Matin-Morgan found out about the toxic vapor this summer but has not heard back from the Army for several months.

“All you can go by is to sit here and wait, and the waiting is very frightening.”

Martin-Morgan says she hired an attorney to ensure she’s protected if her family’s health problems are connected to the toxic vapor. She hopes to leave her home within the next few weeks.

State officials say the Army agreed to install air ventilation systems in homes with elevated levels of chemicals such as Benzene and Trichloroethylene within 21 days of a positive test.  But Bert Langley, who serves as director of compliance for the Georgia Environmental Protection Division within the Georgia Department of Natural Resources, said so far no work has taken place.

“It’s disappointing because they had committed to us and we feel like it’s an important part of the project overall. The whole goal is to protect human health.”

However, Langley said the state can do little to enforce the voluntary agreement.

“At the state level we have very limited legal authority in addressing issues with the Army.”

He said officials believe the hazardous chemicals seeped into groundwater from solvents and cleaning materials that were dumped or buried at Fort Gillem before it closed.

“But in the early days and for many years until the late 70s, we were not very careful about how we disposed of that material and it was not uncommon to have a lot of it end up on the ground surface and some of it even buried.”

Earlier this month, Governor Nathan Deal wrote a letter to a top Army official urging the Army to expedite the testing and mitigation efforts.

In a statement, the Army said,  ”The U.S. Army is engaged in a complex and technical study to assess whether vapors from groundwater pollutants leaving Fort Gillem have impacted the surrounding community.  The U.S. Army has been and continues to be in frequent contact with GA environmental regulators, EPA, and the community to assess the results of ongoing sampling.”

State officials say so far the Army has tested the air quality in  67 houses. They say they’ve received test results for 37 houses and 30 of those homes show elevated levels of the hazardous chemicals. However, the Georgia Environmental Protection Division says the levels are not high enough to “warrant immediate evacuation.”

State environmental officials are in the process of sending a letter to affected residents. They are asking residents to contact the Georgia Department of Public Health with any health-related questions regarding toxic vapor.