Last week in Kansas, federal officials arrested three men they say were plotting to bomb an apartment building that’s home to many Somali-Muslim immigrants. Officials say the men are linked to a loose network of militia groups known as the Three Percenters.

A chapter of that group operates near Atlanta. A windshield decal on Chris Hill’s white truck marks his membership below the words “R.I.P. Johnny Reb.”

“Are we scary? Are we intimidating? I’d say no,” Hill said.

By day, Hill is a paralegal. On his off hours he’s the commanding officer of the Georgia Security Force III% militia. He said he and about 30 active members train one weekend a month in Butts or Henry County.

He said the training is no different than what he experienced in the Marine Corps, except he’s not getting paid. He said his group trains for defensive purposes exclusively. Hill said he got interested in the “patriot” or “militia” movement, terms he uses somewhat interchangeably, about seven years ago.

After bouncing around getting to know the state’s militia options, he said he was asked by local protesters involved in the conservative, anti-Obama “Overpasses for America” movement to provide security. He obliged and started his own group.

“Anywhere people come together to raise awareness and address grievances, we want to be there to prevent opposition from intimidating or threatening people with deadly force,” said Hill. 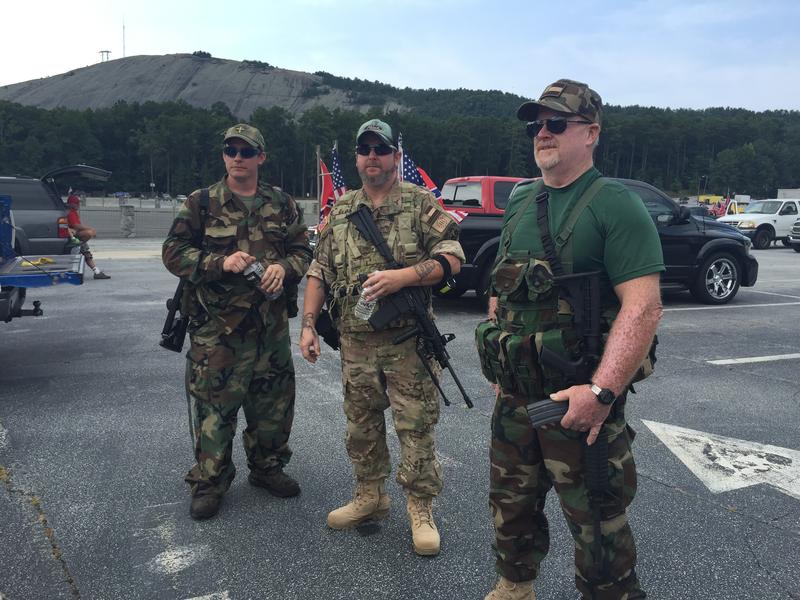 He and his fellow Three Percenters have been an armed presence at pro-Confederate flag rallies at Stone Mountain, and more recently were vocally opposed to a proposed mosque and funeral center in Newton County.

The groups get their name from a belief that it took 3 percent of the population of the American colonies to win the Revolutionary War.

Hill said he condemns the actions of the three men in Kansas arrested for allegedly plotting to bomb Somali immigrants. He’s angry the Three Percenters name is now associated with them, and said he braced for media scrutiny when he heard about the connection.

“It’s just a name, but the media will attach ‘militia’ and give it an ugly face and demonize it,” said Hill. He added that if he were to hear of anyone planning an attack like the one in Kansas, he would report it to authorities.

Ryan Lenz, a senior writer with the Southern Poverty Law Center, which tracks extremists groups, said 101, very decentralized Three Percenter militia groups are active across the country as of their last count in 2015. They’re a subset of a larger movement of militia and patriot groups in the U.S., Lenz said.

“We call it the anti-government extremist movement, because to believe that the government is tyrannical is not really patriotic,” he said. “It came about in response to fears that with the election of President Obama that we were going to see a socialist, progressive president who would usher in all sorts of laws and regulations that would undermine the constitutional freedoms that we have as Americans.”

They’re especially sensitive about a perceived threat to Second Amendment freedoms, he said. In addition to gun rights, Hill said for him, discomfort with the national debt and a fear of the collapse of society are prominent motivators.

Increasingly, according to Lenz, anti-Muslim and anti-immigrant sentiment have been adopted into the ideologies of these groups.

“It’s this sort of cross-pollinating bleedover that is most alarming to a lot of us here, because it’s no longer that the anti-government movement or the patriot movement sees the federal government exclusively as its enemy,” Lenz said. “Now it’s actually moving into racist territory, where it’s focusing its ire on a particular demographic”.

The arrested Kansas militiamen repeatedly referred to the Somali immigrants they allegedly planned to target as “cockroaches,” among other racialized epithets, according to the FBI.

“It is concerning,” said Anita Barnslater, who lives in Henry County. “I understand that they’re scared of another Sept. 11 or terrorist bombs, but we have to be a little open-minded and understand that not everybody is the same.”

But Lenz said there’s no easy way to gauge when ideology will translate to action for one or a few people.

“That’s a difficult question to answer,” he said. “If you talk to the militia leaders, of course they’re trying to put a good face on what they’re doing – to say they’re really there to help the American people in times of need. Whether that be when the federal government goes too far or, say, when a tornado comes through your community and civil unrest follows.”

Lenz said there’s no question that these ideologies have motivated violent actors, but that active attacks are often carried out by a single individual or a small number of people, rather than structured militia groups themselves.