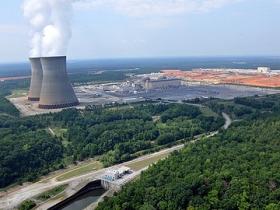 The nuclear expansion project at Plant Vogtle near Augusta is already seven months behind schedule, and testimony given today by Georgia Power officials indicates there may be further delay.

Currently the first new reactor is scheduled to begin operating in November 2016. A second reactor is slated for a year later.

Speaking before the Public Service Commission, Georgia Power attorney David McKinney said the company and its contractors are in dispute over what’s currently achievable.

About a third finished, the $14 billion dollar project is so far estimated to be nearly a billion dollars over budget. Georgia Power’s parent company, Southern Company, and the project contractors are currently suing each other over those costs.

Lawrence Sanders of the Southern Alliance for Clean Energy says further delay is a significant concern.

“The big impact is the amount of interest Georgia Power has to pay on their loans when they’re not selling the power,” said Sanders. “It adds up. We’re talking millions or hundreds of millions of dollars over the life of the project and those get passed on to ratepayers.”

Georgia Power officials say they’re trying to work out a compressed  construction schedule with its contractors in order to finish the units by November 2016 and 2017.

But Georgia Power attorney Kyle Leach said even if the project is delayed further, building the reactors would still be a good idea.

“We have provided two scenarios – one for a 12 month delay, one for an 18 month delay…it still continues to show Vogtle is the economic choice for customers, the best solution for customers.”

The PSC reviews project costs every six months and votes whether to approve them. The latest spending report, which covers the first half of 2012, is set for a vote in February.