One of the most contentious bills of this year’s legislative session failed to get final passage for the second year in a row. The Religious Freedom Restoration Act never made it out of a House committee.

Sen. Josh McKoon, R-Columbus, held on to the end and tried to attach the bill’s language to an unrelated House measure. He argued the bill is needed to make sure the government doesn’t infringe on someone’s religious rights without a good reason. 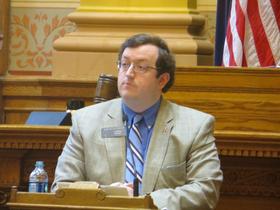 “People of faith would be entitled to better treatment by courts,” McKoon says. “That’s the difference it would make.”

McKoon says the bill closely mirrors a federal act that passed Congress in 1993.

But opponents say it could lead to discrimination against the LGBT community and comes as the U.S. Supreme Court considers whether to legalize gay marriage nationally. On Thursday, Sen. Nan Orrock argued against the bill in the Senate.

“I just don’t want any of to us to have the misapprehension that this doesn’t have something to do with carving out, a legal carve out, to allow discrimination,” says Orrock.

Those speaking out included corporations like Coca-Cola and more than a dozen convention and visitors bureaus throughout Georgia.

McKoon denies it would lead to discrimination and says ultimately business interests won.

“People of faith are considered less important … than corporate CEOs, I think that’s pretty much the message that’s being sent,” McKoon says.

Rep. Jay Powell, R-Camilla, serves on the House Judiciary Committee. The committee added anti-discrimination language to the bill and ultimately decided not to move forward with the legislation.

“It made everybody just say, ‘Oh that could be us, we could be having that discussion, and so maybe we need to make sure that this is what we really want to do before we wind up being in that discussion,’” says Powell.

But the issue isn’t going away. McKoon says he’ll continue to push for the bill again next year.

Gov. Nathan Deal also says he expects the discussion on the religious freedom bill to continue in the future. He had this to say about the outcry Arkansas and Indiana have experienced.

“I hope if and when it comes to my desk in the future that it will not have the same divisiveness associated with it that has been experienced in those two states,” says Deal.

For months, opponents and supporters held dueling rallies and press conferences about the bill at the state Capitol.