Governor Nathan Deal today signed legislation aimed at making it easier for Georgia military veterans and their spouses to find jobs. The governor signed the Veterans’ Licensure Bill during an award ceremony at The Clay National Guard Center in Marietta.Listen to the audio version of this story. 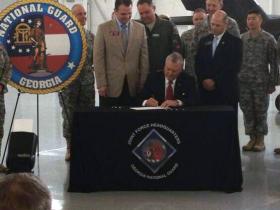 Gov. Deal said House Bill 188 speeds up the process for veterans to obtain state licenses for jobs they’ve trained for in the military, including:

Veteran and state senator Hunter Hill, who sponsored the bill, says it will make the transition to civilian life easier for military families.

“Transitioning into the civilian marketplace can sometimes be daunting,” Hill said, “And anything we can do to make that process easier, especially in the way of cutting red tape, is something I was definitely for.”

The governor said the bill will also make it easier for spouses of service people who hold similar licenses in other states to become licensed in Georgia.