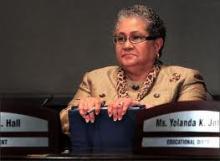 A Fulton County Grand Jury has handed up an indictment in the Atlanta Public Schools cheating scandal.

Arrest warrants have been issued for all the defendants.

WABE’s Martha Dalton is reporting from the Fulton County courthouse. And the WABE newsroom will bring you updates throughout the evening on the web and on 90.1 FM.

APS spokesman Stephen Alford issued this statement on Twitter: “Today’s indictment is between the individuals implicated and the DA’s office, and we will allow the legal process to take its course.”

Here’s the indictment (pdf). Those charged include:

The grand jury is recommending Hall’s bond be set at $7.5 million.

Fulton District Attorney Paul Howard on Hall: “This took place in 58 of the Atlanta public schools.  It would not have taken place if her actions had not made that possible.”

From Martha Dalton’s Twitter feed: District Attorney says without Hall, cheating conspiracy could not have happened.

“While these educators have not been found guilty of a crime, the indictments should serve as a warning that test security should continue to be a top priority for educators in every school. No matter what happens in the courts, our children are the ones who will pay for the cloud cast by this cheating investigation. Now that this issue is in the hands of the District Attorney, we will all be watching closely to see the outcome.” 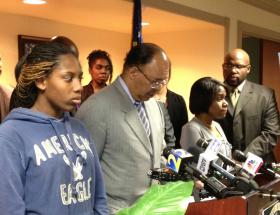