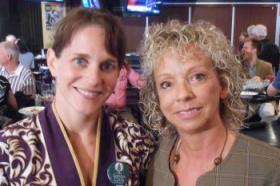 “It’s brought together people from the Left and the Right. We are forming what we call a Green Tea Coalition,” said Dooley.

Shortly after, the state Public Service Commission approved the solar plan in a contentious 3-2 vote.

Seeking to build off that momentum, the Green Tea Coalition had its formal coming out party Tuesday.

“I care about the future of my kids and grandkids. I want them to have a clean environment. You can be conservative and still care about the environment,” said Dooley, speaking before about 50 supporters at a Decatur church.

Past and present employees of Georgia Solar Utilities helped Dooley conceive of and organize the coalition. The Macon-based company has attempted to aggressively expand its footprint in Georgia, but those efforts have stalled due to the state’s regulated electric market and Georgia Power opposition.

“I can assure you we’re not going to agree on everything but the things we do agree on, the Green Tea Coalition is going to focus on and we’re going to start making progress,” said Owl-Greason.

Dooley, in particular, wants the coalition to help shield ratepayers from rising costs related to expanding the Plant Vogtle nuclear site near Augusta. The Georgia Power project is currently about a billion dollars over budget and 18 months behind schedule.

“Ratepayers in Georgia have become a cash cow for Georgia Power,” said Dooley. “The only liability to the ratepayer should be [Vogtle’s] original certified cost and Georgia Power should eat the rest.”

It’s not the first time Dooley has partnered with organizations associated with the Left. Last year, Dooley and the Sierra Club’s Colleen Kiernan teamed up to fight against metro Atlanta’s regional transportation referendum. And before that, Dooley worked with Common Cause to push for stricter ethics rules for elected officials.

At the launch, Kiernan applauded Dooley’s efforts and said she liked the idea of a group aimed at bringing people together, regardless of party.

“Ending subsidies is a good place to start for fossil fuels and nuclear and that’s something that the Tea Party is interested in and we think that most people are with us on that.”

Kiernen, however, was quick to clarify the Sierra Club hadn’t officially joined the coalition – she said Green Tea’s organizational structure is still being worked out, and until then, the Sierra Club would stand by and simply support the idea of greater cooperation across party lines.