The first plan announced to redevelop the Turner Field area would be a $300 million project: that is a ballpark figure.

Under the proposal made public Wednesday by Georgia State University and the private developer hoping to secure the site, there would be two ballparks: a new baseball stadium and a redesign of Turner Field to serve as home field for the GSU Panthers. GSU President Mark Becker says it is too early to say how much of the current incarnation of The Ted would be preserved, but he says he hopes a new design would at least retain the current façade. 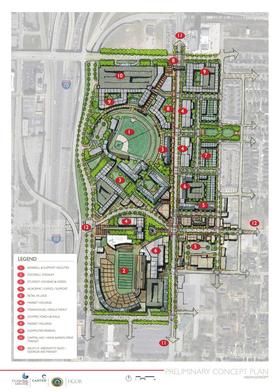 GSU’s financial share of the project would be about a third with the rest of the 70-plus-acre site developed privately by Carter and Associates. It would include single-family housing, student housing and retail and entertainment facilities.

Becker says the plan would aim to honor the city’s athletic history but also help the surrounding neighborhoods, saying, “With the retail and with the type of residential activity and the entertainment opportunities that come with what we’ll be doing there and what can happen around the retail, you also pull up Summerhill and Mechanicsville and surrounding neighborhoods.”

GSU is a public university. Becker says it is possible tax dollars could help pay GSU’s share of the redevelopment costs, but funding plans are still in the early stages.

This is just the first proposal for the site to go public. Carter and Associates President Scott Taylor is confident there will be competition. “The Mayor has said that he has met with a number of qualified parties that have the financial wherewithal to move forward, and we believe him,” said Taylor. And so, we will have to compete on the merits of our vision and ideas.”

The Atlanta-Fulton County Recreation Authority must approve any new plans for the Turner Field site.

Taylor says there are plenty of hurdles, but if this plan crosses them all, construction could begin not long after the Atlanta Braves vacate Turner Field. The Braves have not formally relinquished their rights to the stadium. They have until the end of 2015 to do so, but the team says it plans to start the 2017 baseball season at a new stadium in Cobb County.