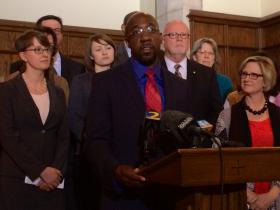 Gun control advocates Wednesday rallied against legislative efforts to expand areas where people can carry firearms one day after the Georgia House of Representatives attempted to force the hand of the Senate on controversial gun legislation.  As heard on the radio.

Speaking at Central Presbyterian Church across the street from the state Capitol, The Rev. Raphael Warnock of Ebenezer Baptist Church said faith groups are united in their opposition to a bill that would expand carry areas to bars, churches and government buildings without security. He spoke with other religious leaders as part of the coalition Faith Voices Against Violence.

“You’ve got Baptists, and Presbyterians, and Episcopalians, and Catholics, and Jews and we all agree. That’s a miracle,” Warnock said.

Warnock and other gun control advocates have been rallying for more than a year against legislative efforts to expand gun carry areas. Last year a bill that also included expanding carry to college campuses failed when the House and Senate couldn’t come to an agreement on campus carry, after the Board of Regents strongly opposed it.

The effort was revived this legislative session in the form of HB 875. That bill still expanded carry to churches, bars, and non-secure government buildings, but dropped college campuses.

In a surprise move, House lawmakers Tuesday tacked most of HB 875 onto another related bill that had already passed the Senate, just as a Senate committee was set to hear testimony on the former bill.

The newly combined bill now goes back to the full Senate, which could be forced to take an up or down vote.

Piyali Cole heads the Georgia chapter of Moms Demand Action. She spoke as part of Georgia Gun Sense, another coalition that rallied Wednesday. She called the House’s move “appalling.”

“It appears that the House does not wish to follow the democratic process, and is trying to sneak the bill through by attaching it to another bill,” Piyali said.

Georgia Carry head Jerry Henry said what the House did was perfectly legal and forces the Senate to take up the issue as approved by the House.

“Last year the Senate held a bill until the very last minute, and nothing got passed, and the House knew [this version] was going to be watered down, and they don’t particularly want it watered down. Nor do we,” Henry said.

Henry said he wants the full Senate to have a say on expanding carry areas.

“We want the senators to be able to vote on the bill on the floor, and that is really something they have not been able to do,” he said.

Senate lawmakers Tuesday said the bill could be moved to a conference committee, rather than a full vote.

The Senate has until then to take up the bill.