Restrictions on car washing, lawn watering and even running ornamental fountains could be coming to Georgia “very soon,” according to Gov. Nathan Deal.

“Obviously the best answer to all of this is to have rainfall,” Deal said, “But we can take proactive steps to try to preserve and conserve as much as possible.”

Much of Georgia is suffering from extreme drought conditions. In early September, the Environmental Protection Division announced a Level 1 drought response in 53 counties. It requires a public information campaign on conservation, but no water use restrictions.

“We’re going to be going to a Level 2 in the drought scenario, and that will be coming forward very soon,” Deal said Thursday.

Level 2 drought restrictions aren’t in effect yet, and they probably won’t be implemented statewide. They would limit watering of “ground cover, trees, shrubs” and other plants, and ban washing vehicles outdoors, noncommercial pressure washing, “using water for ornamental purposes, such as fountains, reflecting pools, and waterfalls,” and washing hard, outdoor services.

“Welcome to the party. We’re in a drought, it’s not as bad as it can be, but it sure is pretty bad,” said Flint Riverkeeper Gordon Rogers in response to Deal’s statements. “Thank you for acknowledging it.”

Farmers may be suffering the most from the drought. Corn, soybean, hay and row crop yields are down. The U.S. Department of Agriculture has designated 77 Georgia counties as being in a “drought disaster,” making some farmers eligible for federal assistance.

Rogers said farmers and local governments have been adjusting to the drought conditions and preparing for the situation to get worse.

“These people are out in front, and our state government should be leaders and not followers in this case,” he said.

State law says it’s up to the Environmental Protection Division to trigger water use restrictions. 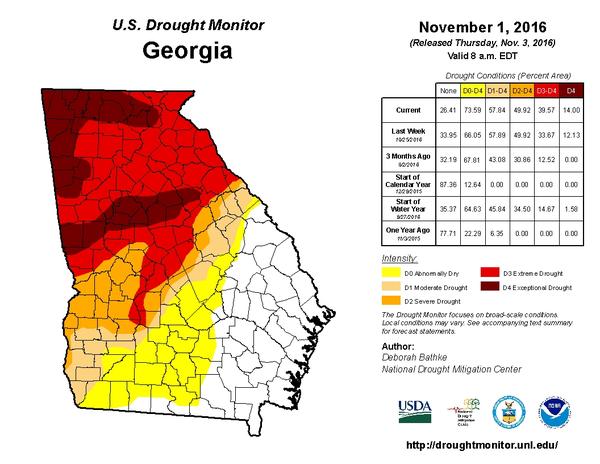 Molly Samuel contributed to this story.