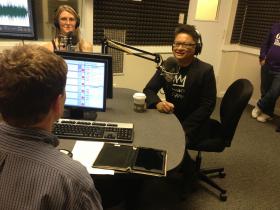 Audio for this story will be available after 1pm

Audiences may recognize the name Alec Mapa for his work as a stand-up comedian or his recurring roles on TV’s Desperate Housewives and Ugly Betty or from the film Marley & Me. Since 2010, another role that Mapa has conquered is that of “father.” Alec and his husband adopted a five-year-old African American boy  and the story of that life-changing event is at the center of Alec Mapa: Baby Daddy, screening this weekend at Out on Film, an LGBT film festival in Atlanta. Mapa and the film’s director Andrea James joined us in the studio to talk about the film and about the adventures of adoption for a 21st century gay couple.

Alec Mapa: Baby Daddy screens at the Landmark Midtown Art Cinema Saturday night at 7 as part of the Out On Film Festival. The screening will be followed by a Q&A.