The Instituto de Mexico and the Atlanta History Center hosted a Three Kings Day celebration yesterday. The holiday originated in Spain but is now celebrated across all Latin American cultures. 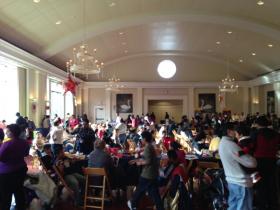 A capacity crowd filled the Atlanta History Center for Dia de Reyes. The celebration reflects on when the three kings or wise men arrived to see the baby Jesus.

But to some people this holiday is mostly seen as an extra day of presents. Genevive Martinez of Puerto Rico was there with her son. “Santa or the baby Jesus brings a lot of gifts. The Three Kings, they just do one or two gifts in our culture. It’s just a simple celebration”.

But Gabriela Gonzalez-Lambertson says that the holiday is about presents, culture and religion. The Institute of Mexico’s executive director says that originally the three kings were the ones who brought children presents rather than Santa Claus. “In some regions they would leave shoes at the foot of your bed. So we’re not talking about huge extravagant gifts. You can’t exactly fit a bike in a shoe”.

In addition to sharing the holiday’s history, the event this weekend featured music, dancing, and tables where children made king’s crowns and piñatas.