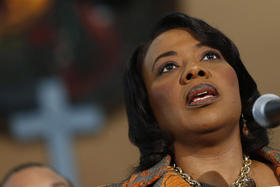 Both relics reside in a safe deposit box, the keys held since March by an Atlanta judge presiding over the latest — and in many eyes, the ugliest — fight between King’s heirs.

The Estate of Martin Luther King Jr. Inc., which is controlled by Martin Luther King III and his younger brother, Dexter Scott King, asked a judge a year ago to order their sister Bernice to turn over their father’s Nobel medal and traveling Bible. The brothers want to sell them to a private buyer.