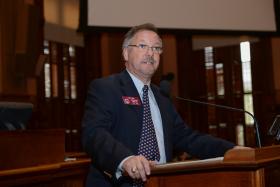 The state legislature Tuesday adjourned until next week due to the weather. Before leaving, lawmakers took action on some key legislation and set the schedule for the remaining days of this year’s session.

House Speaker David Ralston followed the governor’s directive to release anyone living north of I-285 at 10 a.m., and everyone else by noon.

“We are using our utmost efforts to ensure the safety of the employees here on Capitol Hill as well as the members,” said Ralston.

Before adjourning, lawmakers agreed on a schedule. Crossover day, which is the deadline for bills to pass at least one chamber to remain alive, is scheduled for March 3rd. The last day of the 40-day session is set for March 20th. That would make it the quickest session in more than a decade.

Lawmakers also acted on some notable legislation. The House Appropriations Committee approved the governor’s budget for next year without major changes. It now moves to the full House.

The same committee also voted out a bill carried by Democrat Stacey Evans that would restore full tuition coverage to HOPE grant recipients.

Other closely watched bills were dealt with Monday. The House approved legislation that would bar privately contracted school workers, including bus drivers, from collecting unemployment benefits over the summer. It was passed along party lines, with several Democrats including Minority Leader Stacey Abrams speaking strongly against it.

“We are saying to people who are struggling to make ends meet on $13,000 a year that we think that’s too much and instead of asking ten employers to do their part, we’re going to ask 60,000 employees to bear the burden,” said Abrams.

Also on Monday, the House tabled a Republican bill aimed at clarifying how the state treats those on probation for misdemeanors. Democrats and some Republicans said the legislation gave too much power to private probation companies, which have been accused of gouging low-income probationers with excessive fees.

The Legislature will reconvene Monday.