Marietta is now one of seven cities in Georgia where city council members have term limits.

On July 12, council members voted 6-1 to approve the term limits.

“It’s kind of a lousy policy,” Lazarus said. “Really what they do is they create legislatures that are less effective, that produce fewer laws, get less of what they want when they’re negotiating with people in the executive branch and with lobbyists.”

Lazarus studies terms limits and said the body of research shows that when there’s turnover of elected officials, staff members who have been around longer often have to pick up the work. He said lobbyists also tend to have more influence while newly elected officials are still learning their jobs.

“Academics are really, really bad at communicating our knowledge to politicians and policy makers. Many voters already think term limits are a really good idea because they sound good on paper,” Lazarus said. “In a short term way, if I’m a politician, it makes me more appealing to voters when I say, ‘I’m the one who’s going to drain the swamp. I’m going to enact term limits,’ and that helps me win my re-election the next time around.”

City of Marietta Councilman Griffin Chalfant, who is running for re-election this year, said he agrees that term limits could mean losing experienced politicians. Initially, he opposed setting term limits.

“I voted that way because I thought the question of term limits was really aimed at one person and that’s the person that’s been there 37 years,” Chalfant said.

Chalfant said it seemed to target his colleague, Councilman Philip Goldstein, who has served on Marietta’s City Council since 1980.

Chalfant said he changed his mind and voted to pass the measure after residents approached him and pointed out that 80 percent of Marietta residents who voted in a nonbinding referendum in November 2016 voted in favor of term limits.

“The way you present something for a ballot, when you’re laying out a question for a vote, you can end up with 80 percent,” Chalfant said. “But if you broke it down into specifics about it, I don’t think you would have that kind of result. But 80 percent is pretty overwhelming.”

Marietta Mayor Steve Tumlin said he and other council members were following through on a 2013 campaign promise.

“I go to the same Kroger, the same church. As you have term limits, you get another group of people that will go to a different Kroger, a different church,” Tumlin said. “By giving more people more access, you’ll have a greater diversity of people representing our city and different insights, which I think is very, very important.”

According to the Georgia Municipal Association, 23 of more than 500 cities in Georgia limit the number of terms mayors can serve. Only seven, including Marietta, limit council member terms.

Click here to the see a list of cities that have term limits for mayors and city council members.

“Local governments are self-determined by the residents and the citizens,” said Amy Henderson. “And within what the law allows, they do some self-determination, and I think that’s one of the things that make cities interesting, they do reflect the will of the people at the local level.”

Todd Edwards, deputy legislative director of the ACCG: Georgia’s County Association, said only about four counties in Georgia have term limits: Macon-Bibb, Columbia, Telfair and Columbus. Two of them, Columbus and Macon-Bibb, have consolidated city-county governments.

“Term limits will better allow for a ‘changing of the guard’ and bring in new innovative ideas and perspectives. Many of you have asked about the loss of experience, but I do not think that is an issue,” Tumlin wrote. “Many elected officials have already served on boards and committees throughout the city and know the amount of time and level of commitment involved in serving on City Council.”

The mayor and council are now limited to three consecutive terms beginning in January 2018. 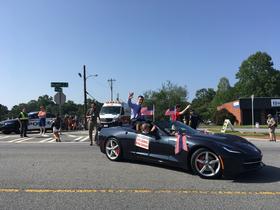 Councilman Goldstein, who opposed the measure, was the only no vote Wednesday night because he said elections serve as term limits.

“The citizens get to choose every four years whether they want someone new or if they want to return them back to office,” Goldstein said.

Goldstein, who was elected to office at the age of 21, was the youngest council member in the city’s history. He said the loss of institutional memory can be harmful.

“From a systems standpoint, that is not necessarily the best structure to go with. You have more of your staff that run things because they’re there longer, they know the process, and it weakens the system,” Goldstein said. “You lose the knowledge that you’ve already tried something and it didn’t work when you have a lot of turnover.”

Goldstein also said he does not believe the city has the legal authority to set term limits.

“Anything affecting the continuation in office or limitation thereof is reserved to an act of General Assembly of the state of Georgia,” Goldstein said. “If you check other cities, you’ll see that they’ve had charters legally amended or were originally written. The difference for Marietta is the city has tried to do itself by an act of the council.”

Goldstein, who is a former prosecutor and practicing attorney, presented a lengthy argument Wednesday night. He said the city of Kennesaw looked at changing term limits in 2015, but its city attorney determined it could only do so through an amendment to Kennesaw’s charter in the General Assembly.

City of Marietta attorney Doug Haynie said the city tried to get an amendment to its charter through the Georgia General Assembly.

“The city went to the Legislature to request that the state impose term limits on Marietta,” Haynie said. “They declined to do it. They couldn’t get enough signatures to get it to the floor of the Legislature.”