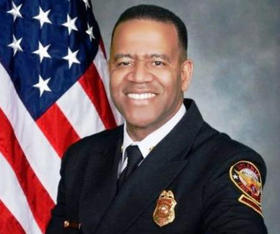 Mayor Kasim Reed fired Cochran just as the chief returned from a 30-day suspension. Cochran was under scrutiny for writing derogatory comments about gay, lesbian, bisexual and transgender people in a self-published book.Broadcast Version

The book, titled “Who Told You That You Are Naked?”, focuses on Cochran’s personal religious beliefs. It was published in 2013 but came to the attention of Reed’s office only late last year.

At an afternoon press conference, flanked by his cabinet and Alex Wan, the city’s lone gay council member, Reed said he liked and respected Cochran, but he had no choice.

Since Reed announced the suspension in November, Cochran has become a lightning rod in a statewide debate over religious liberty. Critics, including the Georgia Baptist Convention and the Duluth-based Faith and Freedom Coalition, organized online campaigns against Reed, saying Cochran should be allowed the First Amendment right to express his religious beliefs.

Others called for Cochran to be fired. Jeff Graham, the leader of the LGBT advocacy group Georgia Equality, warned of a “chilling effect” on city employees if Cochran was allowed to return.

Over the last month, while the city conducted a review, Reed and Wan said they both received hate mail from religious freedom advocates.

“I deeply resent the emails and phone calls to my home, to my wife, during the holidays when I was spending time with my daughter literally calling me an antichrist. Antichrist. And I don’t mean one time or two times. So this is what Chief Cochran brought to my door,” said Reed.