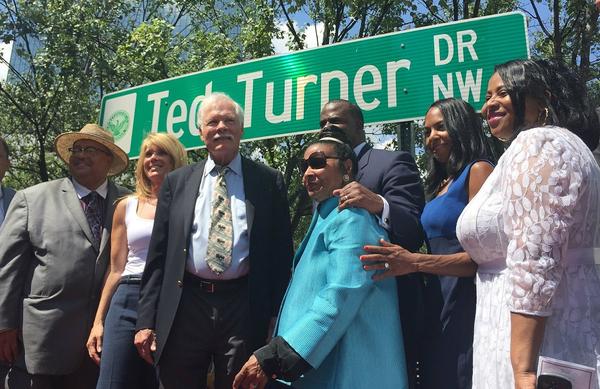 Media mogul and philanthropist Ted Turner said he’s happy a portion of Spring Street in downtown Atlanta has been named in his honor. Ted Turner Drive runs between Whitehall and West Peachtree streets.

Dozens clapped and cheered in a hot parking lot on Ted Turner Drive as the street’s namesake was approaching the podium. Turner said he’s humbled by the honor.

“I can’t tell you how much I appreciate it, but I really do. This is a wonderful honor,” Turner said.

Ted Turner Drive runs past Ted’s Montana Grill, which is owned by Turner and close to CNN Center.

“More than 250 million people around the globe are aware of where we sit right now because of the work of a man who had a vision and believed,” Reed said.

But not everyone is happy. The Atlanta Downtown Neighborhood Association said it’s preparing to sue the city. It claims the council broke its own rules when it approved Ted Turner Drive.

The association says street renaming applications must have a list of the names, addresses and signatures of 75 percent of the residents or businesses located on the street that’s proposed for the new name. Those residents and businesses are supposed to be in favor of the change.