Democrats in Georgia’s House are vastly outnumbered, but they’re hoping to make inroads in several key areas. On Thursday, they unveiled their legislative agenda.

House Democrats put their support behind 26 bills they say will increase educational opportunity and improve economic security for all Georgians.  They want to raise the state’s minimum wage to $15 dollars an hour. House Minority Leader Stacey Abrams says, “As the state which is the 8th largest in the union, we certainly owe it to our families to offer them not only a good wage, but a livable wage.” 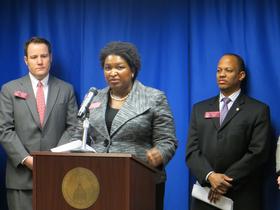 Another bill would give technical college students who receive the HOPE Grant full tuition.  It’s sponsored by Representative Stacey Evans.  Last year, she helped reach a compromise Gov. Deal to expand the HOPE grant to those with at least a 3.5 GPA.

“There are Georgians who are unemployed, but the skills of the unemployed don’t match the skills that are required for those jobs, and by in large those skills can be gained at technical colleges.”

Other bills House democrats would like to see pass include: Legislation that would allow voters to cast their ballots at any precinct in the county where they live, another to prohibit cyberbullying on cell phones and social media websites, and a bill which they say would ensure state financed schools receiving School Scholarship Organizations don’t discriminate.

Despite being in the minority, House Democrats could play a deciding factor on any transportation funding bills. Their votes will also be key on constitutional ballot measures.