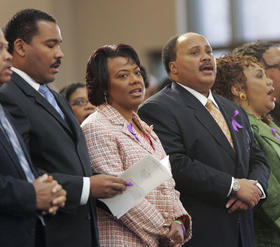 The beautiful melody of the annual King holiday once again is being marred by the discord between the three living children of Coretta and Martin Luther King Jr.

The case pits the two brothers ─ Martin III and Dexter ─ against their sister, Bernice, over possession of their father’s Nobel Peace Prize medal and his Bible. It was in court on Jan. 13.

A week from now, they are expected to be back in another courtroom on another case. This one even more extreme ─ the for-profit King Estate versus the non-profit King Center.Commentator Maria Saporta gives her take on the dispute.

It is such a sad story ─ not only for the King legacy and for Atlanta ─ but especially for Martin, Dexter and Bernice.

Truth be told, I have known and loved each of them since I was 11 years old. They have been through so much: the loss of both their parents and their oldest sister, Yolanda ─ my best friend in fifth and sixth grade.

Assuredly, they have been their own worst enemies.

But they also have been unfairly maligned in the press, often through no fault of their own.

Their father was not a rich man. The main things he had of value were his writings and his words. He had all of his speeches and sermons copyrighted. That’s what he left to his heirs.

But every time the siblings go to court, they just bring more tarnish to their generation. And they further damage the relationships they have with each other.

Find a way to lay down your swords and make peace. Draw upon your parents’ wisdom of non-violence and resolve your differences for the public good.

What a fitting way that would be to honor your parents.

Maria Saporta is the editor of SaportaReport.com.