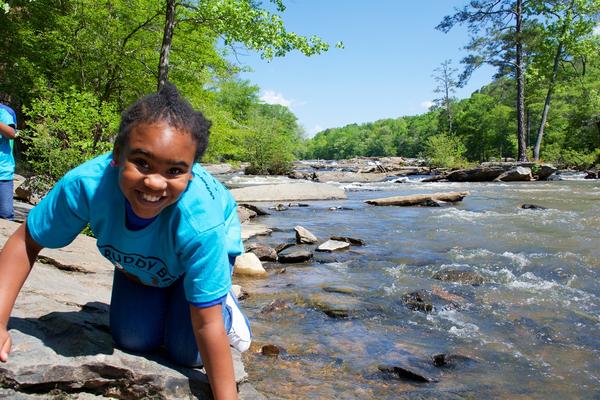 Kids who live in town often don’t get out into the natural areas around Atlanta. At the same time, parks are struggling to attract younger and more diverse visitors. But there are efforts to address both of those gaps.

On a sunny late-April morning, about 25 third graders from M. Agnes Jones Elementary School crowded on the tree-lined bank of Sweetwater Creek, in a state park west of Atlanta for a field trip organized with the help of the National Park Trust. They posed for photos in front of a Civil War-era mill and scrambled on rocks. A few gathered around their teacher, Nakita Womack, who picked up a rock and gave an impromptu lesson.

“Let’s look at some of the characteristics of the rock. Do you see the minerals here?” she said. The students told her, in unison, “Yes.” 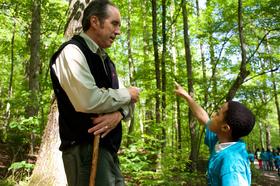 “This is a grade level that tests a lot,” she said. “Teaching is one thing in the classroom, but bringing it outside the classroom is another way for the kids to connect, and it’s real world.”

Real world, but not necessarily a world these kids, who live near downtown, see that often.

One of the students, Randaijah Price, said she has fun on trips like this.

Earlier on the hike, she said she saw a deer and some salamanders. “They were black and slimy,” she said.

This is fun for the kids, and it adds to their learning experience. But bringing this all-African-American third grade class here is also good for the parks.

“There’s been a lot of studies recently that are showing, well, parks are getting a lot of visitors. But if you actually go and look deeper into it, it’s older visitors,” said Collin Knauss, the youth programs coordinator with the nonprofit organization, National Park Trust.

Visitors to parks are also less racially diverse than the country itself. Knauss said officials at the National Park Service and the Forest Service know they have a demographics problem.

Knauss came to Atlanta from Washington, D.C. for this field trip. He said the National Park Trust has worked with more than 60 schools around the country to connect kids to national parks. Georgia-Pacific is helping to pay for this trip as a partner with the school. 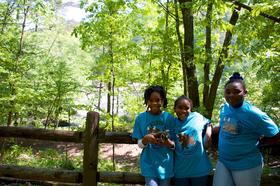 Knauss helps plan trips like this, and when parks are too strapped for cash to keep interpretive rangers on staff, he’ll step in and teach the kids.

That’s not a problem at this park. Interpretive rangers lead the students on a hike and show them animal pelts.

Sweetwater Creek State Park does get a more diverse mix of people than other parks, since it’s relatively close to Atlanta, said one of the rangers, Don Scarbrough. But when he asked the group how many of them had visited before, only one hand went up.

But this trip may have inspired some return visits.

“We do outdoorsy stuff, but we usually stick to the parks that are close to home,” said Alexia Weaver, whose son is in the class. She said after this visit, “I’m thinking we should venture.”