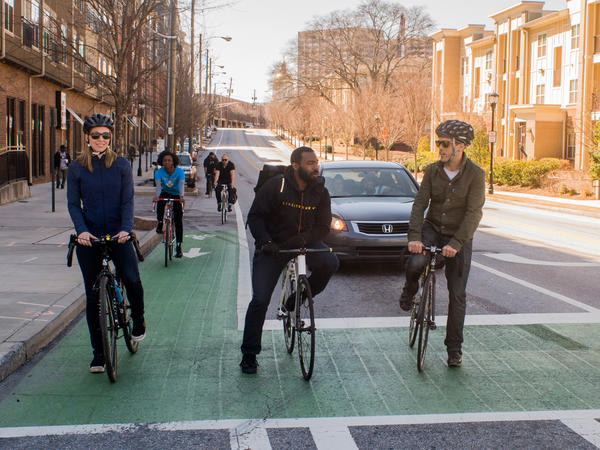 Atlanta planners are coming up with a new bike and pedestrian plan for the region. It’s an update from an older Atlanta Regional Commission plan, put together in 2007.

“We are hearing more and more frequently from our elected officials that this is important to them and their communities,” he said. “But more than that, we’re really hearing from people on the street that they are gung-ho about getting out of their cars.”

With things like the BeltLine, and people and companies moving closer to transit, this is a good time to look at the future of how people will get around, Rushing said. He said this is not just a bureaucratic process, with policy makers staring at maps. Instead, he said they’re looking at how people really travel now.

“We’re trying to do that through a more nuanced perspective of where are these trips occurring in the region, who is doing them, where are they not occurring that we think they probably could be with just a little bit of infrastructure investment, and how do we capitalize on the changing trends in the region?” he said.

Rushing said the Atlanta Regional Commission was actually ahead of metro planning agencies in other cities with its 1972 bike plan. He said it was the first agency of its kind in the country to put together a plan like it. But he said those oil embargoed-fueled intentions faded out of fashion.

“[The region] really did get swept away in the ’80s and ’90s with fast-growing suburban growth, increasing trip distances and less regional political focus on the bicycle trips in particular,” he said.

The ARC will collect feedback from the public on the plan this fall. Once it’s finished, it’s not binding, but Rushing said the ARC can give interested communities technical support and help them get federal money.