Police say a preliminary investigation found the shooting occurred after two groups of students exchanged words outside the school. Police Chief George Turner says a 15-year-old student shot a 14-year-old student with a .380 caliber handgun with a six round capacity magazine in the back of the neck before being apprehended by a school resource officer.

“We think it was definitely gang-related between the two groups. The victim was actually part of one of the groups that was targeted.” 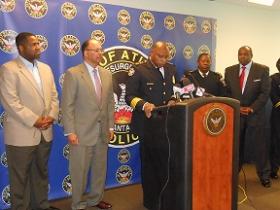 Police and school officials are unsure where the shooter obtained the gun and how it ended up on school grounds.

“As with all devices, particularly electronic and mechanical devices, sometimes they work and sometimes they do not, so certainly there may be periods of time when they’re not working. They were checked out today. However, I don’t whether they were working.”

And Mayor Kasim Reed applauded the Atlanta Police Department for their efforts and says he’s thankful the shooting wasn’t worse.

“We need to take this blessing and understand that tragedy can strike the city of Atlanta and our kids, and we dodged a very, very  devastating bullet in my judgment.”

The Mayor also says he wants to link schools in the district with the city’s video integration center.