It wasn’t long ago that studies revealed America’s kids were overweight and getting fatter.

In 2011, an institute of medicine study showed 1 in 5 children between 2 and 5 years of age was overweight or obese.

Now, Georgia is among several states with a slight decline in childhood obesity. 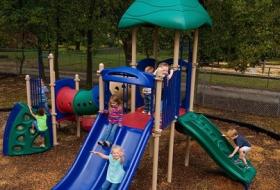 That’s according to a new report from the Atlanta based Centers for Disease Control and Prevention.

And while that’s good news, WABE’s Rose Scott reports what parents can do to help keep the weight off the kids.

According to the CDC, 1 in 8 preschoolers is obese.

This is among children between the ages of 2 and 5.

And while that is good news says Dr.  Stanley Cohen, he is encouraging parents to help continue the trend.

He says it begins with newborns.

“Breastfeeding offers substantial benefits to the child and to the mother.”

Dr. Cohen is a pediatric gastroenterologist and nutritionist as well as an adjunct clinical professor at Emory University.

As the child grows into a toddler, Dr. Cohen says parents need to avoid the sugary drinks, increase fruits and vegetable and encourage physical activity.