That’s the day David Laws got the call every parent dreads.

“And I just knew something was wrong,” Laws said.

The night before, Laws had spoken with his daughter Laura, who was staying at a friend’s house.

“Her mom was screaming over the phone. And I just hung up on her,” Laws said. “Then I picked it up, and she said, you know, Laura’s dead.”

Laura had overdosed on a combination of morphine, cocaine and alcohol. She was 17 years old.

Laura was one of 81 people who died of an overdose in DeKalb County in 2013, according to county records.

Statewide, the Atlanta-based Centers for Disease Control and Prevention said 1,098 Georgians fatally overdosed that year. The following year, that number jumped to 1,206, about a 10 percent increase. According to the Georgia Department of Public Health, more Georgians now die from a drug overdose than in car crashes. But tracking these deaths in Georgia comes with challenges and needs to be improved, said Dr. Gaylord Lopez, director of the Georgia Poison Center.

“To be honest with you, it’s not being done very well,” Lopez said.

Lopez said overdose data, as in who died and what substances were in their system when they died, hasn’t been centralized, making it hard to get a full picture of the state’s heroin and pain killer problem. Some medical examiners offices have different reporting methods, too, so it’s hard to tell how many Georgians died of any one specific drug, like heroin or pain killers. 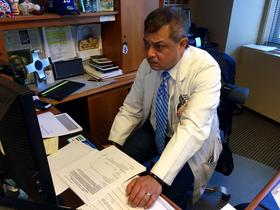 “That is a concern, and we’ve got to patch that system up so that we can be more knowledgeable about what is happening because when it’s happening in piecemeal, and you don’t have all the pieces together, it’s very difficult to tell a story,” Lopez said.

The story officials can’t tell in real time is exactly how big of a problem specific drugs are in the state.

What is known, said Lopez, is that overdose deaths are going up, but the last comprehensive state data is two years old.

Laura’s struggle with addiction began at 15. Her father, Laws, said she was kicked in the face during a soccer game and was prescribed some liquid hydrocodone. That prescription, coupled with teenage experimentation and the sudden death of a close friend, sent Laura on path that eventually led to a heroin addiction.

Laura had gone to rehab and was doing better for a while, but she seemed to have slipped, Laws said. The combination of drugs was too much. 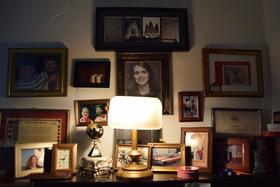 “That support group wasn’t enough, wasn’t there, we didn’t watch it enough. I don’t know,” Laws said. “And I have a feeling she said, ‘I’m not going to do this because I know better, and that might kill me, so I’ll just do this.’ But this and this together was a mistake and proved to be fatal.”

Standing in his den, Laws pulls an earring and a necklace with a purple, cross-shaped charm from a small box. “This is like the stuff after, you know, what was on her when, you know, cremation,” Laws said. He points to Laura’s senior high school picture, which is framed and hung on the wall. In it, she’s wearing the necklace. “It’s that one, right there,” he said.

To improve tracking, the Georgia Bureau of Investigation started work late last year on a database to compile all drug-related deaths across the state.

“When we put all of our statistics together, we are covering the whole state,” Ashley Garrish, the GBI’s assistant deputy director, said. “So you can look at addresses, you can see if certain areas are having a bigger problem with certain drugs.”

The GBI does track overdoses for 152 of the state’s 159 counties and does some work with Hall, Henry and Rockdale counties. The most populous counties – Fulton, Cobb, DeKalb and Gwinnett – track their own overdoses.

“Also, possible dangers with some prescription medications might be noted, or perhaps indicate that drugs are being obtained through illegal channels,” Hanzlick said.

“We’ve never had a reason to compile data this fast before,” said James Langford, executive director of the Georgia Prevention Project, a group aimed at reducing drug use.

“This is like a virus, this is an urgent, urgent problem. But we can’t track the data fast enough,” he said.

Some counties have reported last year’s data, while others, including the GBI, are still finishing up reports and compiling information. The numbers that are coming in show a continued spike in overdose deaths.

‘Misery Into A Ministry’

The group helped pass a bill two years ago that provides immunity from arrest and prosecution to those who call 911 for a drug or alcohol overdose. That bill also extends legal protection to people who administer Naloxone to someone experiencing an overdose.

Laws said Georgia Overdose Prevention has been tracking overdose reversals ever since. His group has given out more than 2,000 Naloxone kits to first responders and people in the community. He said in the last two years, the overdose reversal drug saved more than 500 Georgia lives.

Laws said his effort to help save others struggling with addiction has turned his “misery into a ministry.”