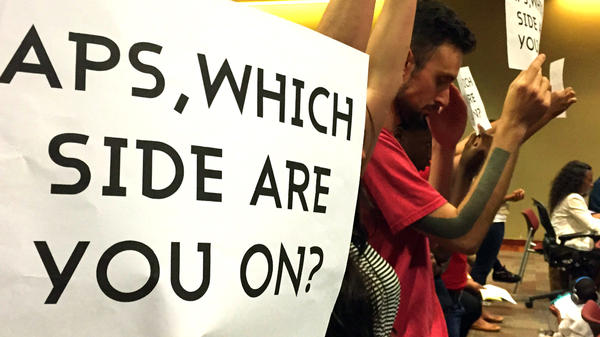 Atlanta Public Schools’ board members got an earful Monday night from parents and others angry over the board’s silence on what they say is an essential issue.

They’re opposed to “Opportunity School District,” the name of Gov. Nathan Deal’s plan to allow the state to take control of underperforming schools.

“We actually need to know what side you are all on because we are on the side against Opportunity School District,” Nelini Stamp, co-director of Rise Up Georgia, told board members. As she spoke, about a dozen audience members lifted signs that read, “APS, which side are you on?”

The governor’s proposal appears on next November’s ballot, so it’s up to voters — not the school board — to decide whether the state can take control of underperforming schools.

But many, like parent Kimberly Brooks, challenged the board to take a stand anyway.

“If you cannot take a position, maybe you do not need to be here and maybe you need to be replaced,” she said.

As a rule, APS board members don’t respond to public comments made at scheduled meetings.

Under Deal’s plan, 27 APS schools are eligible for takeover. Most are in the city’s most challenged areas, including the West and South sides of Atlanta.