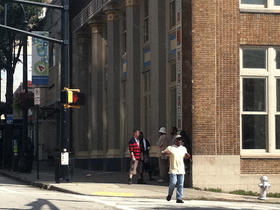 It took three separate checks, several volunteers and an untold number of donors, but today the Metro Atlanta Task for the Homeless paid its years-overdue water bill: $581,678.41.Broadcast Version

“They’re taking the checks, putting them in the system…and generating receipts and telling the system that we’re paid in full.” Anita Beaty stood before the payment window at Atlanta City Hall, giving a play-by-play of the process to more than a dozen supporters standing behind her. “Here’s the receipts. Yea, everybody!” The small crowd responded to Beaty with a cheer that echoed through the City Hall lobby.

“This payment will pay everything we owe,” Beaty told reporters. “So we’ve been limping along since 2008 when they turned off more than half the water in the building. It will be absolutely glorious for the folks who live with us, the men particularly, who won’t have to stand in line quite so long to take a shower or to use the toilets.” 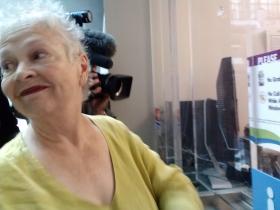 The payment ends the threat of water shut-off for the Peachtree-Pine shelter downtown, which is the largest homeless shelter in Atlanta.

“All is well between the Metro Task Force and the Watershed Management department certainly,” said City spokesperson Melissa Mullinax. “They’ve paid all of the outstanding amounts they owed on both accounts.”

The second account is for the meter that was shut off several years ago; Mullinax says full service should be restored Monday.

Beaty declined to name the people she called “angels”: those who donated the money to keep the city from shutting off the shelter’s water. Earlier this month, Beaty tried to pay $100,000 toward the bill, but Watershed Management officials said they would not accept partial payment.

The payment solves only one of the shelter’s problems. Beaty said the Task Force still owes Georgia Power for the electric bill but said she was not sure exactly how much. In addition, the shelter is still in the middle of a court battle with its landlord and potentially faces eviction.