Georgia's religious shifts are less pronounced than the rest of the country.

A recent Pew Research Center report has shown a sharp increase in Americans unaffiliated with any religion over the past seven years.

While the U.S. is still home to more Christians than any other country, the percentage of people who are not religious has risen by nearly 7 percent nationally.

In Georgia, that trend is less steep. Here, it’s only a 5 percent increase. The South remains more Christian and less unaffiliated than other parts of the country.

So what’s the possible explanation? Nationally, Christians from two traditions ─ Evangelical Protestantism and historically black Protestantism ─ had the slowest decline, according to the report.

Here, the percentage of evangelicals remained unchanged over seven years – 38 percent. Black churches in Georgia even grew by 1 percent, bucking the overall trend away from religion. 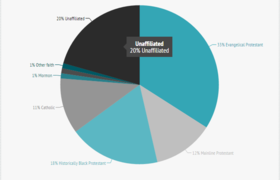 “People of color, especially African-Americans, tend to hang onto their religion much more than the white population,” Jan Love, dean of Emory’s Candler School of Theology, said.

“And evangelicals do quite a good job of socializing their families throughout generations to be attached to religion,” she said.

Catholics and mainline Protestants in Georgia have seen a drop by 3.1 percent and 4.8 percent respectively – which is in line with national trends. In the Atlanta area, the three largest groups, in order, are evangelical Protestants at about 38 percent, people with no religious affiliation at about 18 percent, and black Protestant denominations at about 17 percent.