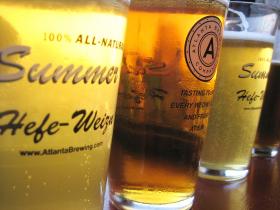 Craft beer brewing is on the rise, with nation-wide sales jumping 20 percent last year according to numbers from the Brewers Association, an industry trade group.

That growth can be seen here in Atlanta with new breweries opening and local beers being offered at more bars and restaurants all over the metro area.

What could the growth of this industry mean to Atlanta’s economy and culture? Georgia State University history professor Larry Grubbs took a look at the question in a post on the Matters of Sense blog in an article titled “Understanding the Craft Beer Renaissance in the ATL.”

WABE’s Myke Johns spoke to Grubbs, to Austin Ray, writer of Creative Loafing’s First Draft column, and to Nancy Palmer, Executive Director of the Georgia Craft Brewers Guild about what this growth means for the city.