Two months of hard work come down to a packed but non-descript seminar room on Georgia Tech’s campus. To hear the audio version of this feature, click on the 'Play' icon above. 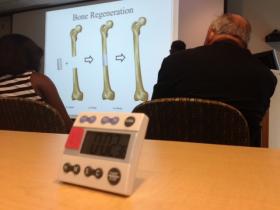 Each student has five minutes to present his or her research, and as the minutes pass, scholars impress with their knowledge of everything from potential long-term side effects of HIV medication to stem cells’ role in treating osteoarthritis to “the effects of S1P and FTY720 on OP9 bone marrow stromal cells.”

The terms roll off Amadou Bah’s tongue as easily as if he’s reciting the alphabet.  Despite his clarity, I have almost zero understanding what he’s saying.

But if Amadou is anything, he’s confident.  He sells this science like an evangelist preaches the gospel.

Afterward, I catch up with Amadou in the hallway.  He stands beside a poster full of his diagrams.  And again, I ask him about that assertion he made when we first met.  The one about finding a cure for cancer. 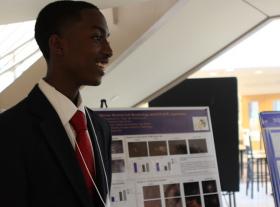 A week ago he told me how his work in the lab is a first step toward that goal.  Now, his response has evolved further.

In a short time, I’ve watched Amadou learn a lot about science.

Most striking is how he’s matured to realize scientific discovery doesn’t happen in isolation.  Science is a community.  Sure, Amadou might be the most confident person in that community, but he now understands he’s one part of something larger.

For Jade Johnson, it’s the reverse. Initially, I got the sense Jade didn’t feel like she belonged here. As if science is bigger than she is. Maybe too big.

“This is a T.E.M,” she explains to the crowd back inside the seminar room. “A T.E.M is a transmission electron microscope machine” she continues, describing her research on nanoparticles, and why nanorods are essential. 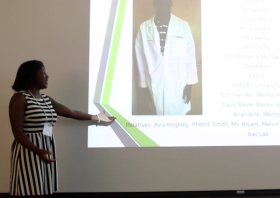 Then something goes wrong.

“There was more to this…” she says after whatever is supposed to happen next in her presentation doesn’t.

Jade doesn’t melt down. She doesn’t try to talk her way out. She’s just honest.

“That’s it,” she says, affirming that what’s done is, well, done.

In the hallway, I wait to talk to Jade who’s busy describing her poster. I want to ask her about her presentation.  Was she nervous?  What happened with the technical gaffe?

I notice a woman standing beside me listening to Jade as intently as I am.

Turns out Trina Latham is Jade’s mom.  And she is proud.

“I knew that it was in her, but now she knows that,” mom says as she beams.

We’re about to wrap up, so I ask the question every reporter saves until last: “Is there anything you wanted to say I didn’t ask?”

If you’ve followed my reports this week, you might remember how Jade’s answers to my questions often surprise me.  I learned to expect it, even to the point I looked forward to her insight.

“Thank you for seeing in my daughter what I’ve always seen in her.  And I’m so proud of her,” she says as her voice quivers and tears magnify her eyes.  ”It’s a great opportunity for her and now people get to see  what I’ve always known about my child, and I’m grateful for that.”

Jade hugs her mom, telling her not to cry.

“He did it,” says mom as she points toward me.

I end the interview with the admission that my eyes are on the brink of welling up, too.

I believe Jade and Amadou learned more than they every bargained for coming in as Project ENGAGE scholars.

From the start I thought this series would be a great chance for me to tell a story, not just report some facts.

Instead, it showed me in ways I’ve never experienced how giving someone a chance–believing in that person’s abilities even if those abilities are not always evident, even if the person is unsure of his or her aptitude–can pay off.

Amadou, Jade, Solomon, Jovanay and the other fine young Project ENGAGE scholars are on the path to finishing school and find their places in the STEM fields.  They’ll make those fields better, for sure.  No doubt they’ll also come through on that promise to make the world a better place.