But a first-of-its kind program between Georgia Tech and two single-gender Atlanta high schools is working to change the trend.

Click the 'Play' icon above for an audio version of this feature.

Twelve teenagers from Coretta Scott King Young Women’s Leadership Academy and B.E.S.T. Academy have just begun a year-long journey as inaugural Project ENGAGE Research Scholars. And throughout the year, I’m dropping in from time-to-time to check on their progress. 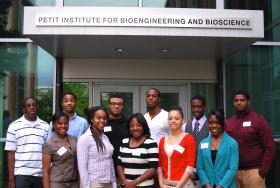 It’s one of those perfect, spring Saturday mornings when I arrive at Georgia Tech’s Petit Institute for Bioengineering and Bioscience. Just outside the building’s side entrance, the newly-chosen class of  Project ENGAGE scholars is lined up for a string of pictures.

“Smiiiile!” says the photographer as she presses the camera’s shutter release.

Most of the students are already are smiling; they’re clearly excited to be here.

Competition to get this paid, year-long internship was intense, and these young people know success here can lead to lots of opportunities down the road.

The plan for this series is to follow and document the full year of the program.  While doing that for all 12 students would be incredible, it’s just not feasible.

So I have to decide on two.

Picking that pair involves a brief interview of the 11 students here (one participant, Jovanay Carter, is away competing in a state track meet).

There are no easy, obvious choices – each is impressive in his or her own way. But I pick Jade Johnson, a rising junior at Coretta Scott King Young Women’s Leadership Academy.

Jade is gregarious and welcoming —  the type of person whose personality puts anyone at ease.

So it’s surprising when she tells me she was angry when word of her acceptance came.

“At first, I didn’t want to hear the news because I wasn’t sure if I made it or not,” she says sheepishly. “The administrator came and got me and she was like, ‘Why are you mad? You made it!’”

Anger turned to shock, she says. Even as she sits before me telling me how excited she is, I get the sense she’s not exactly sure she should be.

Jade is an enigma to me, a complex and intriguing young person whose journey this year could make for a unique story.

My other choice is a 10th grader at B.E.S.T. Academy, an all-male high school.

Amadou Bah is small in stature, but strikingly confident without being cocky. He uses the adjective “big” as if saying the word speaks it into existence.

“I dedicate this summer to trying actually find that cure for cancer, or faster ways to detect it,” he tells me. “I want to be innovate and do something big.”

Amadou exudes a rare optimism and drive, and apparently he makes a similar impression on others.

After I wrap up the student interviews, I check in with BEST Academy principal Gary Cantrell.  I ask him to think about the one student in the group who stands out, and to tell me why.  I tell him I’m not looking for a specific name, but he doesn’t hesitate to give me one anyway: Amadou Bah.

“He’s a go-getter. He exhibits enthusiasm and initiative.  He’s at the top of his class,” says Cantrell. “I think the only thing that needs to happen for him is to have the opportunity.”

Opportunity.  If there’s one word to describe Project ENGAGE, that’s it.

Getting past the minority divide in the STEM field will take a lot of effort, says Coretta Scott King High principal Termerion McCrary-Lakes.

“We feel like this program will definitely make an impact on that talent gap,” she says. “So our kids will be able to get some real, authentic research at the high school level.  That’s pretty exciting.”

For most teens, summer means sleeping in, hanging out, and doing anything but think about school.

For these students, it involves an intense bio-cellular “boot camp,” hours in the lab, and writing regular progress reports.

And they can’t wait to get started.