To hear the on-air version, click the play button above.

What role should the public play in talks about a new stadium for the Atlanta Falcons?

One organization argues the Falcons and the state need more public input before a deal is final.

Leaders with the Atlanta Falcons and the Georgia World Congress Center Authority have talked privately about a new stadium. Those talks are legal as long a quorum of a government board is not present. 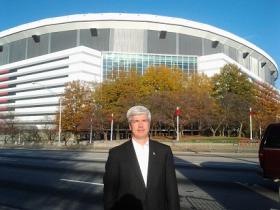 Even if they are not breaking the law, Common Cause Georgia head William Perry argues the groups should add seats at the table for the public.

“When we’ve got a state agency dealing with a $1.2 billion facility, a third of which will be funded by taxpayers, taxpayers and citizens have a right and need to be engaged in the process,” said Perry.

Before a new stadium is built, Perry argues the Falcons should prove the new stadium’s purpose.

Other questions include how much the city will have to spend on stadium related infrastructure.