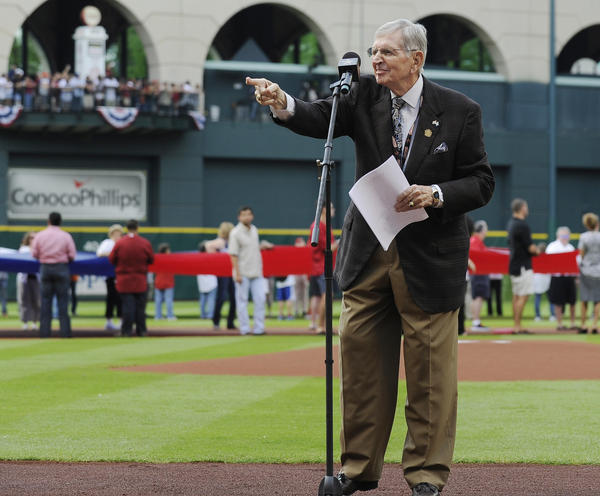 Hall of Fame broadcaster Milo Hamilton made one of these calls. As the Atlanta Braves play-by-play announcer, he called the play in 1974 when baseball great Hank Aaron hit his historic 715th home run at the old Atlanta-Fulton County Stadium against the Los Angeles Dodgers

Hamilton died in Houston on Thursday. He was 88 years old.

Atlanta was just one stop along the road in a 60-year career that took Hamilton to seven different major league clubs starting in 1953, including both the Chicago Cubs and the Chicago White Sox.

The famed announcer started in the radio days of baseball when listening to a ball game on the radio was the next best thing to being there, then moved into television sports broadcasting.

“I was very young and started listening to the Braves on radio, you know, him and Ernie Johnson,” Rosenberg said during an interview on “Closer Look.”

In fact, Rosenberg said he was at the game with his grandparents when Hamilton called Hank Aaron’s historic 715th run.

“The other thing Milo did was he did a really good job of preparing for the game … he kept very extensive statistics on the players before computers and programs did that.”

Hamilton won the prestigious Baseball Hall of Fame Frick Award, the industry’s greatest honor for excellence in broadcasting, in 1992.

Hamilton is survived by his son, Mark Hamilton.