U.S. lawmakers are pretty polarized these days, but they seem to agree investing in early education pays off. Studies show kids who go to school early have a better chance of graduating from high school and are less likely to commit crimes. So hundreds of education researchers wrote an open letter to policymakers urging them to prioritize early education.Broadcast version.

Steve Barnett signed the letter. He’s the director of the National Institute for Early Education Research at Rutgers University.  He’s optimistic Congress will increase access to classroom instruction for children under the age of five. 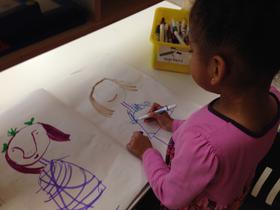 “I’m hopeful because the public is highly supportive, because it isn’t a partisan issue, and because there is substantial consensus in the scientific community about the importance of good early childhood programs,” he says.

“We would be able to serve all children whose parents want to enroll them in Georgia Pre-K. We could reduce class size, which would improve the quality of our Georgia Pre-K program,” she says. “We could potentially increase the salaries of our Pre-K teachers, which has been an issue in past years.”

Salaries should be part of the investment, Barnett says. The average preschool teacher makes $13 an hour.

“Quality starts with a good teacher,” he says. “I think the public understands that. I don’t think they understand that the average preschool teacher makes less than a dog walker.”

The first test for lawmakers could be Thursday. That’s when the Senate votes on a bill that would provide childcare funding to states.