Audio version of this story

Roundabouts are nothing new in Georgia. The past 15 years have seen hundreds built across the state. 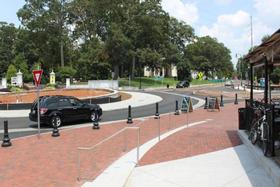 But even after a decade and a half to get used to them, the battle for the hearts and minds of ordinary drivers remains the roundabout’s toughest fight.

First, if you’re someone who doesn’t actually drive through roundabouts on the regular, close your eyes and imagine one. If what pops up for you is this scene from “National Lampoon’s European Vacation,” or maybe this one from “The Simpsons,” then you’re just as confused as many Americans.

Confused because the traffic feature starring in those scenes is not what American engineers are referring to at all when they make plans for modern roundabouts.  The Lambeth Bridge Roundabout in London is what they call a traffic circle. A completely different beast.

Mark Lenters, who’s spent more than two and a half decades advising on roundabouts all over the country, says that all roundabouts have in common with their larger cousins, traffic circles and rotaries, is their shape. They’re circular.

In every other way, he says, rotaries and traffic circles are completely different. “There could be merging and weaving” through their many lanes, “and you’ll sometimes see stop signs placed on the entries. You may see traffic signs controlling them, like Dupont Circle in Washington, D.C. But their safety performance is quite poor.”

They’re crash-prone. Legitimately scary to drivers. In other words, rotaries and traffic circles have given the circular intersection a bad name.

Enter roundabouts, the small intersections with the big PR battle. 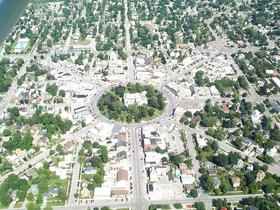 Here are the key differences between the roundabouts springing up all over Georgia and the rest of the country ─ and their larger cousins:

First, roundabouts have a much simpler design. At usually about half the diameter (less than 300 feet is common), they make for slower speeds. The traffic rules of the roundabout also boil down to just two:

1. As your car approaches the roundabout, yield to the drivers already circling;

2. As you exit, it’s nice to use your turn-signal to alert the driver behind you.

This simple design leads to faster traffic flow, compared with intersections with stoplights.

Scott Zehngraff sees kind of a poetry there, although as assistant state traffic engineer with the Georgia Department of Transportation, he doesn’t use terms like “poetry” to describe traffic features.

Instead, he talks about the “geometry of intersections,” talking in clear, dry numbers to explain what makes roundabouts so safe. They see 40 percent fewer crashes compared to traditional intersections, and 90 percent fewer fatalities. “And the main reason is that the two approaches of traffic … you’re going at an angle coming in, it’s a side-swipe type of crash instead, when they do happen.”

This is because cars come at each other fairly slowly, at maybe 20 miles per hour tops, and at an acute angle, rather than the 90-degree T-bone angle of regular intersections.

Zehngraff’s department now oversees 150 roundabouts all over Georgia, about 30 of which are in metro Atlanta. But he still finds himself explaining their safety and simplicity of design, again and again, to people in communities they’re planned for ─ people haunted by memories of rotaries and traffic circles in other parts of the country.

For example, he had one concerned citizen in a north Georgia town call in again and again to complain about a proposed roundabout in his town. “But after it got built, he called back and said, ‘I don’t know why I’ve been calling and complaining this whole time. This works great, and I wish I wouldn’t have complained about it.”

With roundabouts, he says, driving is believing. But, according to roundabout advocate Mark Lenters, they also ask something more of us. “There’s definitely change. Change in the way you enter intersections, the way you interact with drivers. The fact that you have to interact with drivers. You know, in the traffic signal, it’s ‘red-green, your turn, my turn,’ and the signal tells us when to go, and we don’t have to look at each other, we don’t have to interact.”

But when driving a roundabout, we do. The design lends itself to eye contact, no interceding lights or signals involved.

What both these engineers are saying, is that there’s something essentially human in a roundabout. Centuries ago, roundabouts’ earliest forerunners once served as the centers of towns and villages, the places where roads — and people — came together.

Scott Zehngraff says they can still do that today.

“If you think about it, a driver that might be going 55, 65 miles per hour on the interstate. [Entering a roundabout,] they’re going to have to go through a geometric feature that slows them down and changes their mindset as they’re going into this community that, ‘Hey, you’re coming into something different;’ you need to slow down.”

And this might be the biggest challenge of all for Georgia drivers: Whether we’re willing to put down our cell phones and look one another in the eye as we move a little slower.