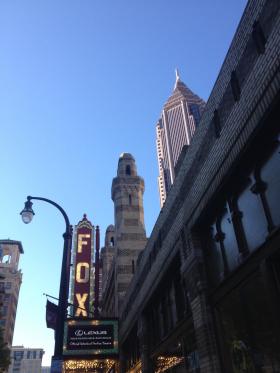 This year marks the 40th anniversary of the campaign to save the Fox Theatre. In 1974, the iconic downtown movie house was in disrepair and was sold to Southern Bell with the intention of demolishing it to build a parking lot.

The citizens of Atlanta went into an uproar, petitioning, fundraising, and ultimately saving the Fox. On September 23, the theater announced a year-long celebration commemorating that event. WABE’s Myke Johns spoke to Joe Myers, a commercial real estate lawyer and one of the members of the original Save the Fox Committee. They talked about the theater’s long struggle leading up to its near-destruction forty years ago.

The Fox Theatre is planning a long list of commemorative events to celebrate the 40th anniversary of the Save the Fox campaign, including a gala event, concerts, theatrical performances, and a block party which will take over Peachtree Street next summer—you can find more information about that online here.  Morning Edition host Steve Goss spoke with Fox Theatre CEO Allan Vella and you can hear that interview here.