One of the rarest salamanders in the country lives in Georgia – or, at least, it used to – a survey last year didn’t turn any up in the wild. It’s called the frosted flatwoods salamander, and there’s a new project in Atlanta to breed the species in captivity.

The last time scientists documented one of these guys in Georgia was in 2015, near the coast. That’s where they’d usually live, in longleaf pine forests.

Now, a bunch of flatwoods salamanders live in Buckhead.

“There they are,” says Mark Mandica, founder of the Amphibian Foundation, opening the back door of his SUV. The salamanders were packed into plastic food takeout containers in the back seat.

“Packed in little deli cups in sphagnum moss to keep them moist,” Mandica says. “This is one of the most endangered amphibians on this continent right now. Suffered a 90 percent loss in population since 2000.”

He’s moving the 15 flatwoods salamanders into their new digs: A lab at the Amphibian Foundation. This is the largest captive breeding project anyone’s ever tried with them, Mandica says. Dozens of other larval salamanders are already in the lab; they look like tadpoles. 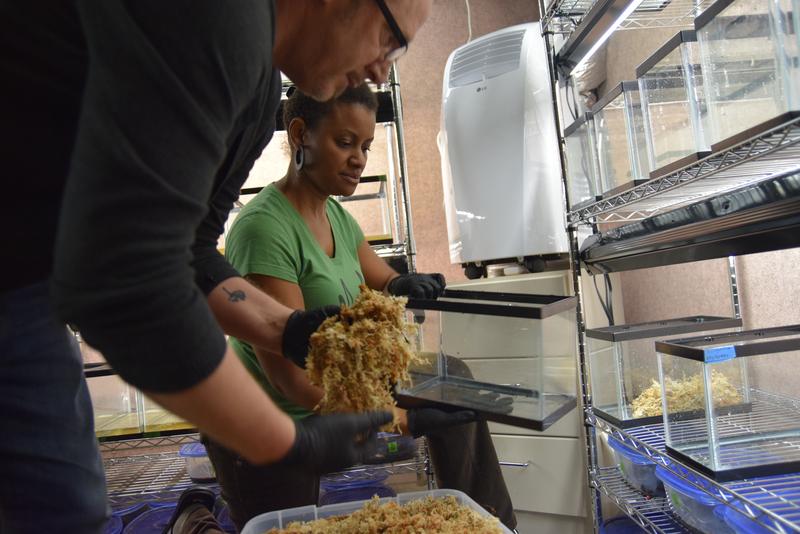 The salamanders Mandica is working with are from Georgia and Florida. The salamanders still survive in a few places in Florida, and Mandica says he hopes that wild ones will turn up in Georgia again. If everything goes well with this breeding program, which Mandica is working on with support from the U.S. Fish and Wildlife Service and the Georgia Department of Natural Resources, he hopes to begin releasing some back into the wild in about a year.

“When I speak with people that worked with them 25 years ago, they were very common,” he says. “I think if anybody saw one, they would think they are beautiful, little slimy, smiley little salamanders that we should be keeping around.”