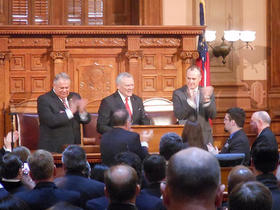 On Wednesday, Governor Nathan Deal delivered his most optimistic state of the state speech since taking office. During the speech, Deal announced his budget will include an additional $547 million dollars for K-12 education.

If approved, Deal says the funding boost would be the largest the state has seen for K-12 education in seven years.

“This will enable us in partnership with local school districts to restore instructional days, eliminate teacher furloughs and increase teacher salaries.”

The proposal comes in a year where Deal is seeking reelection.

The governor has been criticized by other gubernatorial candidates for austerity cuts made to education. But Deal took the opportunity to defend his education record.

“Funding for Quality Basic Education, that outdated formula that allocates revenue to the local school districts, has increased roughly 13 percent since fiscal year 2011.”

Deal also proposed the creation of a new Hope Grant which would allow technical college students who maintain a 3.5 GPA to receive full tuition. The governor also said his budget will include $10 million dollars in low-interest loans for students in the technical college system.

Another $35 million in Deal’s budget would go toward the deepening of the Port of Savannah. Deal also continued to voice his opposition to Medicaid expansion under the Federal Affordable Care Act.

“The Affordable Care Act is anything but affordable and is costing our state $327 million dollars this year.”

During those remarks, Democrats who have been pushing for expansion remained seated. Deal’s budget is now in the hands of state lawmakers.