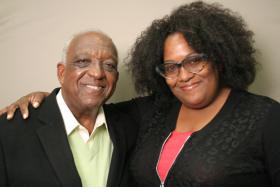 Curtis Browder grew up in Birmingham, Alabama, and as a child played with one of the girls who was killed in the 1963 16th Street church bombing. In the StoryCorps booth, Curtis told his daughter Michelle about an early experience that he had as a prison chaplain that tested his faith.

This story was recorded in partnership with the Atlanta History Center, which hosts Atlanta’s StoryCorps booth.