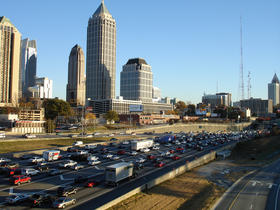 The metro-Atlanta area can expect a big population growth in the next 15 years, according to a new report released by the Washington, D.C.-based Urban Institute.

The study lays out 27 scenarios for population growth based on historical data for births, deaths and migration. Even under the most conservative projections, the study shows the metro population could grow by more than a million by 2030.As heard on the radio

Under more pessimistic estimates, like a low birth rate, high death rate and little migration, the report shows the metro commuting area growing by about 1.3 million people. But if births are high, migration is up and deaths are low that number triples to more than 4 million.

“It gives some guidelines as to what they should be thinking about,” Nan Astone, a senior fellow with the Center for Labor, Human Services and Population at the Urban Institute, says.

Astone says the U.S. Census Bureau used to provide these kinds of projections but no longer does. She says this study isn’t meant to be taken as indisputable fact, but rather sets out a series of possible futures, or “what ifs.”

Still, Astone says these estimates are meant to get cities planning for the future, both the good aspects and the bad.

“Schools is one place where I really think these projections suggest that Atlanta should be thinking about that,” says Astone. “And transportation is really key.”

Astone says local politicians should start weighing some of these scenarios now.